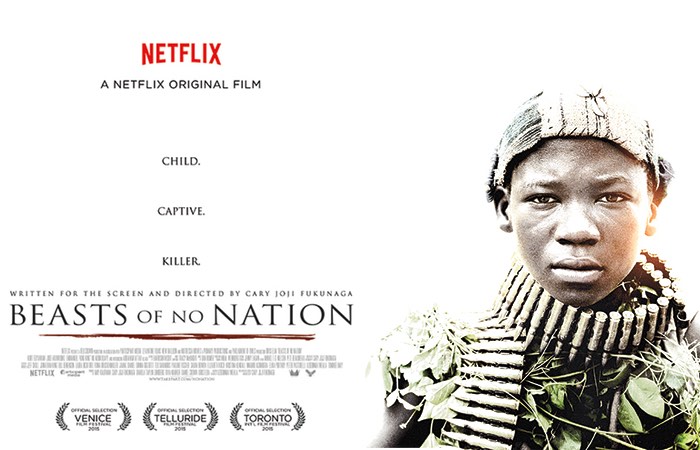 Let me accept at the outset, the two main reasons I was interested in this movie initially were, firstly, the director, Mr Cary Fukunaga (best known for directing Jane Eyre & the first season of True Detective) and secondly the fact that this is the first fictional feature distributed by Netflix. The coming together of these two had to create a buzz among the discerning audience. Mr Fukunaga, known for his tight scripts, vivid imagination, indulgent storytelling and well researched work introduces us to the world of Agu ( Abraham Attah, who imbues Agu with appreciable charisma and nuance) during a revolution in an unnamed country. He is also the embittered narrator of this story, which starts off with Agu leading a peaceful country life with his family but within the first half hour, the mischief and schoolyard concerns give away to a fight for survival once the military kills his family on false accusations.

As luck would have it, Agu finds protection in a guerilla group headed by The Commandant, Mr Idris Alba, in an understated, yet menacing role. He is more of a cipher for his young brigade than a ruthless leader as his name implies. Alba plays the role with a calm demeanor, menacing and friendly at the same time with interludes invoking some humour. Agu soon takes up the mantle of the Commandant’s trusted confidante and bodyguard and transforms from a kid under the mercy of the gun to a merciless child warrior. One such scene hits you right in the guts when Agu is forced to crack the skull of a captive soldier as a test of his adherence to the cause, whatever that may be. Fukunaga is a master at directing brutal scenes with that tiny bit of soul and human emotions. The cinematography compliments the whole mood that the director tries to create and the setting is equal measures dark and somber with a touch of melancholy, yet never deviating from the human element. The scene where the group ransacks an establishment and Agu, for a fleeting moment becomes a child again when he sees a mother hiding with her daughter in her clutches exemplifies the director’s intentions to arouse disgust and pity at the same time in the audience’s mind.

“Bullet is just eating everything”, Agu says at one point. The movie itself is non relenting in terms of keeping the audience in the middle of the warring forces, yet, the human element, the futile cause for which children are used, the dirty politics played within cosy houses whereas those at the battleground kill each other to satiate someone’s whims and ambitions, makes the audience realize that this is in fact a true story. You cannot pin point a country or group which is going through this, but you surely relate this to some of the news we get to hear on a daily basis. That is the reason this story is important during these times and needs to be seen.

Fukunaga had been working on this project for 7 years and the effort shows. This is not a story of trained warriors fighting a just cause. It is a story about a lost childhood, about kids and teenagers who howl loud slogans without believing in them, about a commandant who motivates his brigade with passion, yet fails to keep it loyal towards the end when the young men realize the futility of it all. Above all, it is Agu’s story of having to grow up too soon, in the most testing of conditions with vengeance in his heart for the murderers of his family and his innocence.

Why we think the movie will get entry into the Oscars—

The Director—Mr Cary Fukunaga’s work has been followed very closely by many ever since he created magic with Matthew Mcconaughey and Woody Harrelson in True Detective. His style of directing involves indulgent, bloody, dark shots which grows on the audience. He brings the best out of his actors, in this case, young Abraham is a revelation. Fukunaga can create horror without the usual sensationalism. The case in point here is a scene towards the beginning where Agu and his family are hiding from the onrushing soldiers. The tiny confinement with bullet holes, human silhouette meandering ever so close, hapless families waiting for impending death itself creates an unnerving experience in the minds of the audience.

Abraham Attah & Idris Alba—The kid is a revelation. At some point in the movie, the audience is bound to get a feeling of watching a documentary, such is the strength of his character. The emotional turbulence caused by grief, rage and blood thirst has been depicted with surprising command by this first timer.

Idris Alba’s warlord portrayal and his voice accentuates the god fatherly role that The Commandant plays in the mostly young brigade. With occasional antics and his fatherly treatment towards Agu, Alba gets the sympathy of the viewers.

Categories in which the movie may get recognized—

Best Cinematography—Cary Fukunaga. The movie’s images stay in your mind as a vivid picture. The morning after, when you read the newspaper, look for the image in your mind. You will be able to relate somewhere.

Best Supporting actor— Idris Alba. Abraham Attah makes a good case for himself, but there have been some other stellar performances this year and we fear his Agu might get lost in all of that.

Best Adapted Screenplay—Cary Fukunaga. The actors give the movie flesh and blood but Cary is the soul of the film. A nomination is in order for this tireless creator.

gobblpoint— Watch it alone. Let the movie sink in. And after finishing, please ponder on the subject matter and on the lives that some among us have been forced to lead.