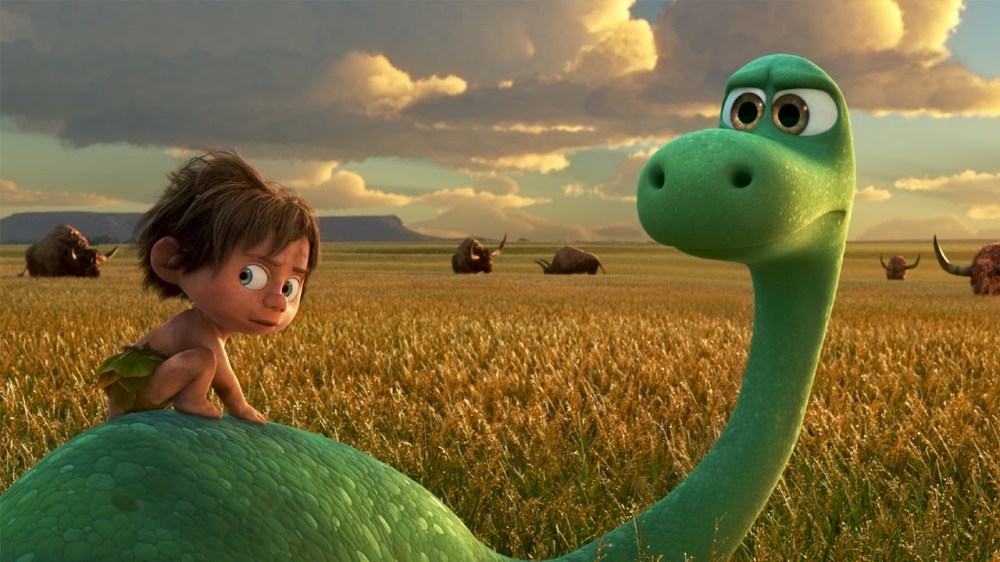 Every time we think film-makers were done with Dinosaurs, someone always comes up with a story which hooks us for yet another crazy reptilian adventure. The Good Dinosaur takes on the premise of the fantasy of 90s kids – what if Dinosaurs weren’t extinct, what if human evolution overlapped with their presence on Earth (thank you Spielberg!). So in this alternate version of events, the meteor which was supposed to strike Earth and wipe out the Dinos, doesn’t make it and as a result, Dinosaurs stay on well into the period when the first humans started to appear.

Pixar has this knack of using alternate realities with endearing stories that not only have a significant moral value exemplified through the adventures the central character makes but also an underlying social value that tends to put our attention toward the problems or challenges our world faces on a macro-level. Digressing here a bit, one of our all-time favourites – Wall-E told us about a world which had been overrun by garbage forcing humans to flee their own planet and home, and how a robot is able to bring humanity back by showing them that life was now possible back there.

The Good Dinosaur is about overcoming your fears and taking responsibility for your actions. At the same time, it shows that revenge blinds you to facts and makes you someone you are not. Arlo, who was a gentle herbivorous dinosaur, is driven by revenge for his father’s death. He forgets his inane nature and chases the tiny human kid who itself was trying to survive a world full of predators.

When Arlo is saved by the human kid from between a rock and a hard place, literally, they become friends and he understands that life is all about choices. Chasing after the kid was his father’s choice. Saving him from under the rock was the kid’s choice. Its the choices, really, that make you who you are.

This philosophy is a clear reflection of what is wrong with our society. Wars are fought on misrepresented facts by political institutions. The suppressed retaliate through terrorism and this becomes an unending vicious cycle that has grown into such a threat that we are afraid and scared for the future. We need to make a serious effort to understand each other. Although Arlo and the human were a species millions of years apart in their evolution, they were tied through an invisible thread of kindness. As aptly quoted by Poppa – “You have to get through your fear to see the beauty on the other side.”

No wonder we have at least one Pixar film being nominated for Best Animation Feature Film every year. They do not just make films aimed at showing their animation prowess. They show us that kindness and love rules over our basest of instincts. Even in the most apocalyptic environment, good deeds are repaid only with good deeds.

Best Animated Feature Film: This is the second movie which we think has the calibre to make it to the list. Although we would bet our money on Inside Out (that gem!), The Good Dinosaur has used a unique premise to show us that oxymorons are more of a norm than exceptions. The very name seems to stand against our notions that dinosaurs (roarrrrr!) are huge and hungry and dumb.  Although it did introduce a few characters whom we would have loved to see more of but didn’t, it displayed a most unlikely friendship that anyone could ever have imagined. Well Chris Pratt did come close to befriending Raptors but those were genetically modified dinos, not the real thing so deal with that Chris!

The animation as always was beautiful and detailed with some excellent shots like where Arlo’s father swirls his tail in a meadow and thousands of fireflies surround them in an entrancing moment enhanced by 3D.

Humour in Pixar’s movies is subtle and doesn’t impose on you trying to ensure you laughed but fleets in and out quite naturally without disturbing the overall mood of the movie. There was this scene where Arlo and Spot eat some red berries and get high, unintentionally of course. The next scene was straight from a Dali painting where everything was melting away and they were flying together. The kid’s face had become huge and resembled the kid from the Mad magazines. Left us in splits.

So here’s our rating:

gobblpoint : Shows a beautiful father-son relationship besides the endearing story, where Arlo’s father tells him – “You are me and more.” Watch it with your parents and your kids. You will all go back home with renewed respect for each other.