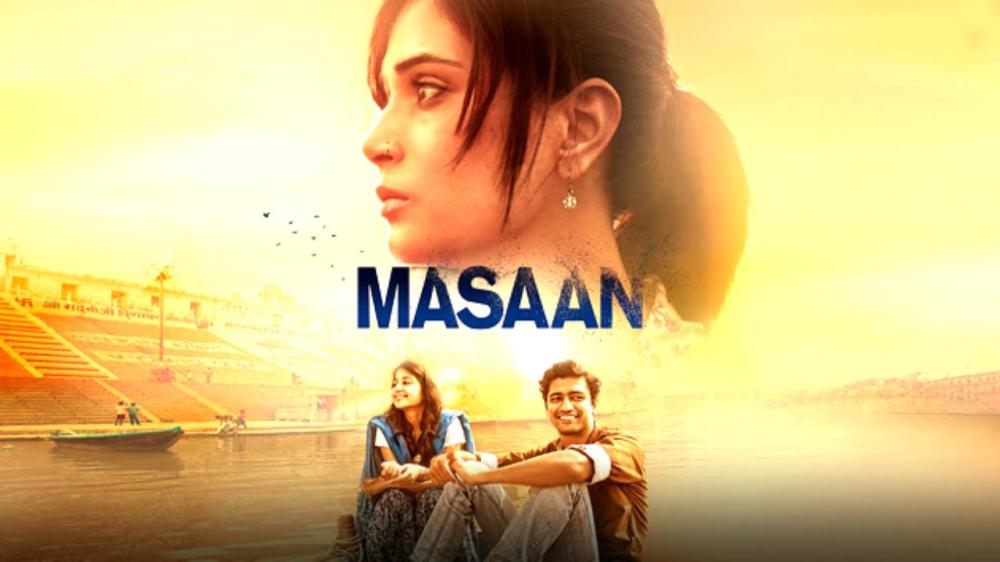 There are few movies that hit you with the gritty reality that exists around us without caring to screen-write it so as to fit our minds which are conditioned for poetic justice and happy endings.  Masaan doesn’t follow the rules.

This movie captures the journey of two unrelated characters from the holy city of Varanasi which is basically an epitome of small town India characterised by an infusion of a sense of strong religious morality. Devi, played by Richa Chaddha, is the daughter of a Hindu priest who checks into a hotel room with her boyfriend to consummate their love for each other. The very idea of the daughter of a priest being so deeply involved in her life drives home the fact that every individual is different and the beliefs of one should not be extended to their children into making their life decisions. Even though Devi and her boyfriend were consenting adults and were legally within their rights, a group of policemen headed by an inspector, raids their hotel room and arrests them for “indecent public behaviour”. As the police threaten them and ask them to call their parents, the guy rushes into the bathroom and in a moment of helplessness and shame, slits his wrists, killing himself on the spot. The sheer humiliation of the couple, the mocking and jeering of the police and the utter disregard for any human rights and privacy has been accurately depicted in this very unsettling scene.

These are the kind of events that we read in newspapers like the raids in one Mumbai hotel. We nod our heads and understand the unfairness of it but watching it transpire in front of you is a whole other story. Media never goes beyond covering the act of moral policing. They fail to show how the victims are scarred for life, how they suffer from social ridicule and distrust from their own family. This very sensitive aspect of how they live their whole lives under the looming shadow that someday someone would uncover their past and humiliate them even if it was no fault of their own, is starkly shown.

The second arc Deepak, played by Vicky Kaushal, comes from a low-caste family who have been in the business of cremating corpses for generations. Even though he has lived around burning corpses all his life, he dreams about escaping his apparent fate by studying Civil Engineering in the local Polytechnic college. That is the only place where he can forget where he comes from and can dream about landing a well-paying job in a good office. The outlook towards life of a person who has always lived in that ghastly place, has been authentically portrayed. The scene where the cremation workers are seen raking the ashes and bones after the burning, evokes the feeling that if there is hell on earth anywhere, it is here.

While in college, Deepak becomes infatuated with a girl in his class but is too shy to talk to her. He is afraid of the fact that she would outright refuse him when she comes to know about his family. But as they get to talk, they develop feelings for each other. When he confesses and tells the truth about his origin, she stays undeterred about her feelings for him. Before leaving for a pilgrimage with her family, she encourages him to get placed with a good salary so that they can get married. You see hope gleaming in their innocent eyes showing a way through the bleakness. One day as Deepak is helping his brother in the cremation activities, he notices the face of the girl lying on one of the funeral pyres. As staggering disbelief hits him, his brother tells him about an accident where a bus had fallen over a cliff killing all its passengers. He falls into chronic depression as shown in a scene where he sobs in front of his friends expressing his desire to die. As he slowly overcomes the futility of the incident, he regains his sense of purpose and soon lands a job in the Railways.

Masaan, a crude derivative of the sanskrit word shmasaan meaning ‘cremation ground’ is a reflection of the debasement of humanity and social construct. It is a dichotomy showing the polar opposites that coexist around us. Both the characters are subconsciously affected by their cultural origins. When on one hand, Devi comes from a higher caste and is expected to uphold her “values”, she cowers under the guilt after the incident and almost completely loses her self-respect. On the other hand, Deepak who comes from a lower caste, is repeatedly reminded that his place is the lowermost wrung of the social ladder and that he should gracefully accept his reality. Both characters fight two different battles but with the common purpose of escaping their destiny and making their own future.

Indian Ocean has amazingly captured the essence of the story through their original soundtrack. Tu kisi rail si portrays the innocence of young love transcending the dark mood throughout the movie. Mann kasturi is grounded to the fact that we may be spinning and dancing to our fate’s whims but the thread of the spinning top is still in our hands.

To shine, you must burn !

gobblpoint: We are not sure what you have read or heard about this movie but it does not intend to dwell on an intellectual subject. It does not intend to do any kind of social reform. Watch it for the naked truth that it intends to show you. Make your own perception about the characters. You’ll know your country more closely than before.

Disclaimer: The photograph used in this blog is the sole property of the makers of this film and are not owned by us in any form.