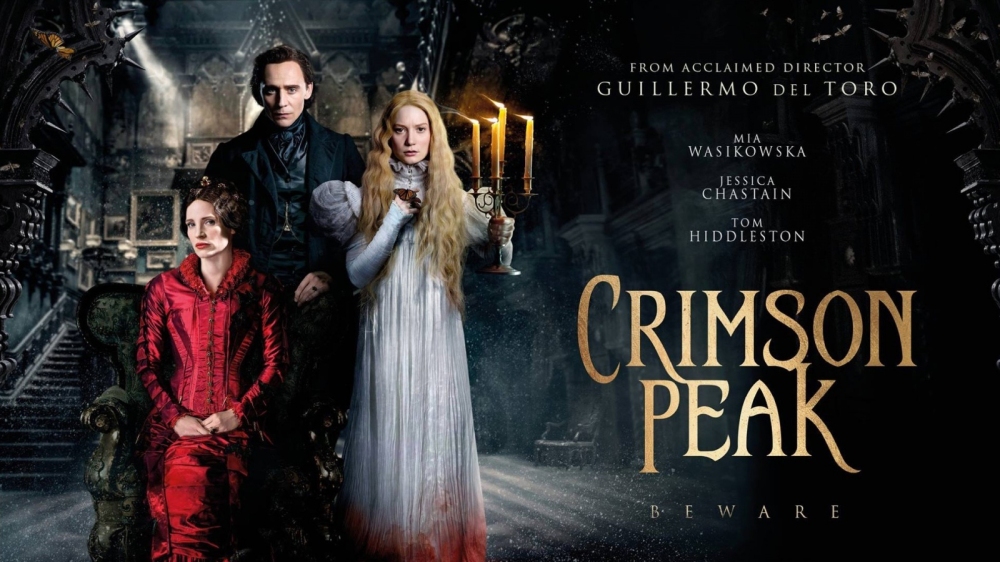 Guillermo del Toro is one of those directors who make movies with great care, sculpting each scene, each aspect of the imagery, creating genres of their own as a result. Unlike  Tim Burton, who manufactures his own worlds for his quirky and often dark characters, del Toro weaves the charm of past eras with an element of supernatural mysticism. There is beauty in his darkness.

Crimson Peak is in every way a pure del Toro. Based in an America which is at the brink of the Industrial revolution from the feel of it, it depicts a time when businesses were run in an orthodox and totalitarian fashion not readily allowing outsiders to become partners. This was also a time when the suffragette had probably not happened and women were not given equal rights as men, as was evident when Edith Cushing, played by Mia Wasikowska is forced to type her novel-in-progress to hide her feminine handwriting just so that her literary agent would take her more seriously. The story takes an interesting turn when Sir Thomas Sharpe, played by Tom Hiddleston, appears in town with his sister Lady Lucille, played by Jessica Chastain. With their striking appearance they are able to charm the social circles in a very short time which was unusual for an unknown family name. Until this point, you don’t really see much of Chastain who remains slightly elusive, fleeting  in and out of scenes but very much there with a commanding air around her.

It was interesting to note how the colour profile changed as the story progressed from one section to another. In the first half, the imagery was a sunset yellow projecting a very vintage classical-victorian feel to it. Hiddleston, is always dressed in black greatly contrasting the colour profile and giving an impression that he did not belong there making the mood even more mysterious, forcing us to clamour for a moment when we can see his real face and understand his true intentions. This gripping sense of paranoia is constant throughout the plot.

But the transformation of Chastain from a sociable lady into a monster was the real treat. From the very first scene of her entrance, one feels unsettled even when she is in her most gracious self. This feeling grows exponentially as the second part of the story emerges in their dilapidated childhood home which is a huge mansion in utter decay. The landscape is much like the old house from The Woman in Black. The sense of rot and decay is magnified by the mushy red clay all around the place which has seeped into every crevice of the house and has resulted in deep red cracks which are literally oozing red blood-like clay. del Toro employs his classic style of tying moods to objects and places with a dark past, like he does in one of our favourites The Orphanage. From hereon, you start noticing dark red hues everywhere consistent with the transformation of locale as well as Chastain who is metamorphosed into an epitome of sheer brute and ages of suppressed rage. She becomes the exact antonym of the society originally depicted which suppresses women. Her imposing presence as bloodlust grips her, is bestial exacting one’s undivided attention and respect.

Crimson Peak is a palette of moods with a subservient plot which is a tad predictable. Having said that, a well-written cast of characters makes it a treat to watch. With beautiful cinematography as with most of his films, del Toro’s imaginative work is never a one to be missed.

gobblpoint: Watch it for one of the most chilling performances from Chastain. Another feather in her ever-growing plume of wide-ranging acts. Needless to say, if you are a del Toro fan, you would not be disappointed with this one.

Disclaimer: The photograph used in this blog is the sole property of the makers of this film and is not owned by us in any form.