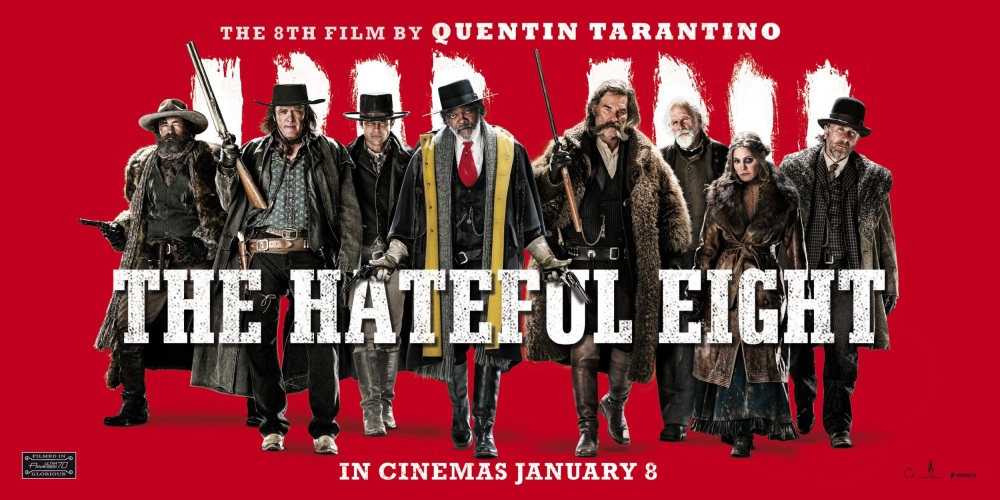 Among the handful of rebel directors who don’t remotely play by the rules, Tarantino is one. Be it the scene in a French village where a certain Nazi Officer interrogates a simple farmer about some runaway Jews as they hide under the floor-boards or the the scene where a psychotic feudal Lord makes a deal with a bounty-hunter, knowing all the while that he is being fooled, Tino (lets hope that doesn’t stick) makes the audience squirm in their seats as they go through gut-wrenching moments anticipating the on-your-face unpredictability.

The Hateful Eight places its footing as a civil war western during a time when Lincoln was the President of the United States. Tino projects the rustic charm of the time by shooting the complete film in Ultra Panavision anamorphic format bringing the 70mm release to theatres. This technique, which hasn’t been used in almost 50 years, has been beautifully executed by ace Cinematographer Robert Richardson who has captivated us before through Hugo, The Aviator and JFK.

As the name gives away, this eighth story like the other seven, revolves around the basest of human emotions – Hatred, which runs like an undercurrent among the central characters whom destiny has converged on a fateful (and hateful…could not resist) little rest-house called Minnie’s Haberdashery. The motley crowd, seemingly on their way to a small town Red Rock, are forced to put up quarters owing to a strong blizzard on the mountains. As John Ruth (played by Kurt Russell) goes around the room asking introduction from the residents, you find the unsettling feeling of unpredictability behind their courteous replies. John Ruth aka The Hangman is carrying a bounty to Red Rock, a crooked toothed, savage lady who goes by the name of Daisy Domergue (played by Jennifer Leigh). Leigh is every bit the hard-skinned westerner who keeps getting hit and battered by Russell for her snide remarks in the most serious discussions. Her exactitude in playing the devil is a treat when she greets our favourite Samuel L. Jackson aka Major Marquis Warren with a wink and – “Howdy nigger?”. The eyes on his weathered face are reminiscent of “Say what again, say what again ? I dare you, I double-dare you…..”.

Jackson is a bounty-hunter as well who is transporting three dead bounties to Red Rock. He comes from a civil war background and seems to be infamous in those parts aptly summarised in a statement characteristic of Jackson – “The ones who are alive, ran away. The ones who died, met me.” There is a sense of hatred that he carries for the racist white race owing to the many atrocities he may have gone through due to them. It almost felt like a sequel to Django where he has become an old man but still a ferocious bounty-hunter. The unsettling feeling is built for a large part of the film, through subtle props like the busted door which had to be slammed with two planks and nails to keep it closed against the storm outside. You keep thinking what would have happened earlier for the door to be that way. Leigh feels like a ticking bomb, fidgety and full of cheeky remarks. Tino has given us some of the most powerful female protagonists over the years and Domergue is a worthy addition to that group.

Having mentioned most of the nuances without giving away too much, The Hateful Eight, in our opinion, is not Tarantino’s best work. Although there are all the characteristic elements that we love in his works, the story did not have the powerful impact that it usually has. Usually there are some endearing scenes in his movies  that scream – “Justice is served”, but the Eighth seemed to be lacking in that. Oh and how we have missed Christoph Waltz. It felt as if Tim Roth (we did love him in Reservoir Dogs and Pulp Fiction) was brought in to fill in that void, maybe ‘cause Waltz was busy.

The original score, the first for a Tarantino movie, was given by Ennio Morricone who has given us captivating soundtracks in Kill Bill, Django Unchained and Inglourious Basterds. Interestingly, Morricone has used some of the tracks which were unused from the 1982 John Carpenter’s The Thing. However, there was no defining tone which was weaved throughout the story. There was no ‘trademark’ which would give you immediate recognition of the film if randomly played somewhere. *whistling the Kill Bill tune*

Best Cinematography: Richardson’s use of 70 mm Panavision camera has done wonders to the mood of the film and has proved that physical reels can coexist with Digital technologies. However, the contest is strong with cinematographer Emmanuel Lubezki for his phenomenal work in Iñárritu’s The Revenant.

Best Actress in a Supporting Role: Jennifer Jason Leigh has made a serious dent in this category with her wild, savage performance amongst an all-male cast. We could hardly take our eyes off her even in the presence of our favourite (well, we love that brotha!) Samuel L Jackson. She will give Kate Winslet a run for her money for her equally impactful role in Steve Jobs.

Best Original Score: Having said what we said before, this film does have some memorable moments. The country song which Leigh plays beautifully melds into the mood, well, until Russell bashes the guitar on a pole. As we said, unpredictability (thats the only spoiler here, relax…). Even though there is no signature tune here, Morricone’s score stands strongly in this category with potent mix of alternative rock and country which gives a certain soul to the film.

gobblpoint: When Tarantino makes a film, you get yourself up and you go watch it. This time we won’t sell it through Sam Jackson. This time, its the new kid on the block – Jennifer Leigh. Watch her for her portrayal of the most Hateful character of them all and for some of the most endearing dialogues yet.

Disclaimer: The image used in this blog is the sole property of the makers of this film and is not owned by us in any form whatsoever.