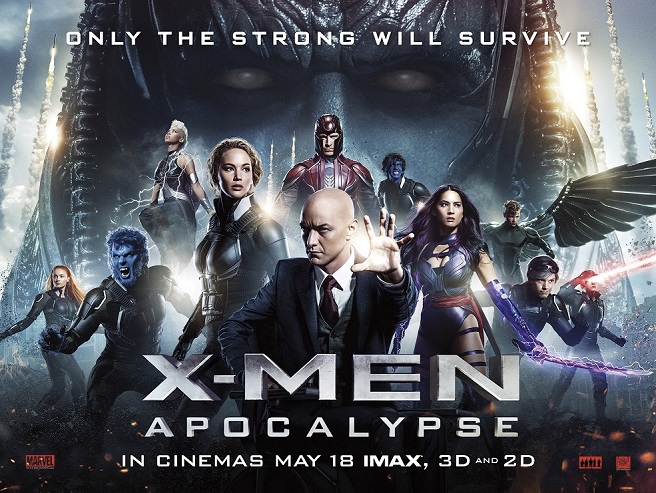 Before we begin, here is a Starter Pack for your very own ensemble superhero movie—

Few uncomfortably good looking men and women, made all the more exotic with make-up and body hugging spandex clothing. Add to it a  variety of eye catching super powers which will mostly involve CGI, but interspersed with the actor’s facial shots just for authenticity. A brief back story so that the audience cares and cringes when any of those heroes are in danger. A villain from “end of the world” school of eclectic thought and philosophy. And Stan Lee (because he is the boss! Or may be the Watcher? ). And lo behold, you have made yourself a superhero movie!

Well, all joking aside, we fully appreciate the efforts put into making such big budget entertainers and the creative process which makes those breathtaking action set pieces possible. But X Men: Apocalypse releases at a time when there have already been 2 ensemble superhero movies which released almost back to back. The weight of expectations and the paper thin plot line makes this installment in the X Men franchise, a bit of an underwhelming affair.

Directed by Bryan Singer, who can be unofficially credited with starting the superhero genre of movies back in 2000 with the first X Men movie, Apocalypse is weighed down with too many characters, introduction of the younger version of iconic X Men and a villain, En Sabah Nur, who appears invincible and formidable, yet, most of the time he is on screen, he is either recruiting his Horsemen or talking about toppling the world order, false gods etc. Only in the scene where En Sabah Nur neutralizes all the nuclear arsenal of countries across the globe in one go, we, as audience kind of egg him on as we forget that this is just a movie and revel in a hypothetical world peace.

James Mcavoy and Michael Fassbender are earnest in their respective roles as Proffessor Xavier and Magneto. Specially, the back story of Fassbender’s character trying to lead a simple life in Poland with his family is touching and the abrupt turmoil in his life is equally disturbing. Sophie Turner (Jean Grey) gets meaty screen time and she does justice to her apprehensive, self-doubting and bit recluse character. Mystique (Jennifer Lawrence) looks perpetually brooding which takes away bit of the appeal of this franchise regular. Among the younger lot, Quicksilver and Nightcrawler do their best to bring in some much needed comic relief, a Marvel Comics trademark. And the award for the best set piece within the movie should again go to Quicksilver for a repeat of his fast ways, just like in the last movie.

Director Bryan Singer tries to give a back story to most of the characters and so, compromises on the action quotient in the first half. Yet, he has enough X Men to play with and so the audience remains glued to the screen with anticipation. Singer ditches the formula of having set pieces after every fifteen minutes of strategy, as he culminates everything with an elaborate final show down between the X Men and Apocalypse and his horsemen.

The movie actually starts promisingly, with the ancient Egyptian backdrop of the 4th century and the story of the first known mutant who gets resurrected in 1983 and finds the human civilization creating a world order which he finds dystopian and complex. There is an underlying commentary on the political scenario of the present world which is ruled by false gods and superpowers whose regimes are a result of dominance and force. The back stories pull the movie down with slow pacing, although we appreciate the effort made by the filmmakers to allow us to connect with the ensemble cast. It could have been done better.

Overall, X Men: Apocalypse is a one time watch at best. It does not take the story much further, but a few eye catching scenes, one breezy cameo and the mayhem at the end makes it bearable.

Gobblpoint– Watch the movie if you are a sucker for men and women showing CGI-aided superpowers on a huge screen.

Disclaimer: The image used in this blog is the sole property of the makers of this film and is not owned by us in any form whatsoever.