The internet is replete with listicles about lead characters in Hollywood movies/ series which can be portrayed by Indian actors. Most of those lists end up being a forced fit and as readers, we have a hearty time laughing at them (like that one article which suggested that Tyrion Lannister’s role in Game of Thrones can be played by Rajpal Yadav!! Face-legpalm)  The patriots that we are, we figured, why not make a list of Bollywood characters which can have leading stars from Hollywood play them. Here are 5 of those selected Bollywood roles–

Amitabh’s badassery in movies such as the ones mentioned in the heading is unmatched, even in Bollywood. When a septuagenarian plays a gun-wielding killer with elan, you can be rest assured that there are only a selected few artists who can match that kind of presence on screen. It was tough to zero in on a Hollywood actor who commands such imagery on screen and who sounds cool dishing out threats to helpless villains and their side-kicks in cold blood. Our answer, Liam Neeson.

To be fair, out of all his “very particular set of skills”, we guess “good parenting” comes last! Ahem!….TAKEN series….Ahem! But the actor has a certain kind of brooding demeanour which sends chills down the spines of the bad guys. Despite his age, he looks uber-cool breaking bones on screen. He can also switch seamlessly into an emotional character, like the one he played in Love Actually. He would make the perfect “hot headed action figure on the wrong side of age, but on the right side of cool”.

Every die hard Bollywood fan has the unfulfilled wish of listening to Raj Kumar’s husky voice in the Dolby surround sound theatres of today. The man had an aura unprecedented in Bollywood. It even looked odd to see him getting punched by villains in a fight sequence, so much so that in later movies, the villain’s side-kicks could hardly stand 2 seconds in front of him without being demolished into smithereens. His mannerisms, cold stares, idiom-worthy dialogues, all made him the star that he was.

Clint Eastwood is Hollywood’s Raj Kumar, which we are sure is a compliment to both the legends. The kind of roles he has immortalised on screen have been etched in the memory of the fans for years to come. The golden boy of Sphagetti westerns of the 60s and 70s, Eastwood got old, but like good wine, he got better. His face, all pleated and puckered, emotes far better than most leading men in the industry. His raspy voice adds to the man’s repertoire of skills and made movies like Dirty Harry , Million Dollar Baby, Gran Tarino, the cult classics they are.

In terms of looks, skills and roles which both played, Raj Kumar and Clint Eastwood look like brothers  in the business of making the classy sound and seem classier. 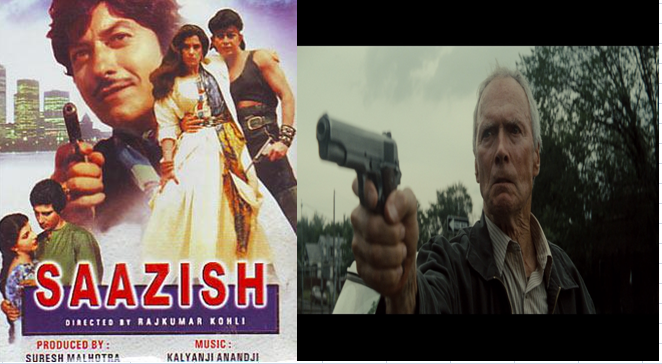 Nasseruddin Shah is one of those doyens of the Hindi film industry who has made a mark in art movies as well as the typical “masala” stuff with equal aplomb. In Sarfarosh he played the role of the Ghazal Singer from across the border with hidden agenda, Gulfam Hassan. It was a role which was falsely revered in the first half of the movie, only to be uncovered in the later part, once his ulterior motives are understood. Nasser Saab was a revelation in the movie. His restraint act with careful manipulation of those around him and the eventual climatic scene where he is encountered by the protagonist was a master class in acting.

Sir Ben Kingsley is an institution in himself when it comes to playing complex characters which are both layered and demand more emotional portrayal than physical. His roles in Gandhi, Sexy Beast, Schindler’s List, Hugo have made him a modern day legend. Even in Iron Man 3, his role, although criticised for its sudden change from evil to silly, displayed the range which this artist can show on screen. May be that role can serve as the reference point for Sir Ben to play the scheming singer-turned-terrorist in Sarfarosh.

This is one role which every Shah Rukh fan brings forth as reference whenever someone criticises his recent movie choices. And all for good reason. This was a benchmark movie in Bollywood for multiple reasons. Not your typical Bollywood masala flick, this movie explored the hitherto relatively untouched genre of sports movies involving a women’s team. His role as the coach whose image had been tarnished previously and is on a redemption mission, was highly appreciated and the movie was a critical and commercial success.

Denzel Washington is the go to man in Hollywood whenever it has to find someone to give an inspirational speech. His turn as the coach in Remember the Titans and as the incarcerated father of a top Basketball prodigy in He Got Game and his role as pugilist Hurricane Carter in The Hurricane makes him a master in sports movies which have a classic inspirational speech. Denzel’s conviction in his roles and his robust delivery has seen him get two Oscars till now. His experience with sports movies will stand him in good stead in playing the role of the women’s team coach from Chak De! India.

Both Hritik and Chris have greek God-like looks. Both look good in armour and also while wielding weapons. Hritik’s Akbar was spot on. The movie transcends barriers of culture, gender and religion and is also an underlying commentary on the secular thread of India. This is one epic which was a period movie in its treatment but a mainstream commercial venture. It catapulted Hritik to stardom and the audience loved his kinglike looks.

Chris on the other hand has made the character of Thor his own. Even his role of the Huntsman in the fantasy-adventure movie Snow White and the Huntsman strengthens his claim as the go to guy for fantasy or period roles. His long locks, husky voice and physical prowess have made him the perfect choice of a Hollywood actor to play the iconic Akbar if ever there was a Hollywood version of the movie.

We would love to see the Hollywood versions of the iconic Bollywood movie characters mentioned above. Do let us know if you can think of any other actors who can play popular Bollywood roles.