Created by The Duffer Brothers, Netflix’s Stranger Things stands testimony to the fact that the 80s era is perennial. Today’s modern, consumerist culture has become a giant social monster devouring every sliver of simplicity from people’s lives. There is no mystery alive today that would stay long enough to intrigue generations. As Groucho Marx had correctly predicted – “In the future, every one would have their 15 minutes of fame.” No story lives more than those fatal 15 mins in our convoluted world. As such, its no surprise that film-makers tend to keep going back to the period of 80s to narrate an effective mystery which as compared with the simple backdrop provides the much needed catharsis that we crave so much. Add endearing characters with a tightly written script and you have got a classic on your hands.

The Duffer brothers took great care in crafting the look and feel starting from the font of the intro marquee to the background score to the get-up of each character. And it just works !

Stranger Things, as described by one writer is “a tribute to the 80s” and this phrase precisely portrays the essence of this production. The Duffer brothers took great care in crafting the look and feel starting from the font of the intro marquee to the background score to the get-up of each character. And it just works ! It adds so much to the charm that even before you’re into the very first episode, you are subliminally hooked to it.

History behind the Stranger Things font

Based in a sleepy little town named Hawkins, the story begins with the scene where a bunch of kids are playing a fantasy board game, each as excited as the next unwittingly sending us back to the days when there were no iPhones to distract us from actual human interaction. Since its a school night, one of the kid’s mother reprimands them and sternly asks them to return to their respective homes. While returning home, one of the kids Will Byers mysteriously disappears into the night, grabbed by a strange creature. When he doesn’t return home the next day, his mom Joyce, played by Winona Ryder, helplessly contacts the local Police station chief Hopper to help her find him.

In a parallel story arc, we also get to see scenes of a clandestine government operation where weird experiments are being conducted. We see doctors and lab-technicians entering a grotesque gateway which seems to lead to the netherworld. This underlying gloom pervades the imagery of the people of Hawkins as this small town suddenly becomes a hunting ground for whatever has escaped from that gateway. As the hunt for the missing kid ensues, Will Byers’ friends Dustin, Mike and Lucas begin their own search equipped with torches and walkie-talkies, reminiscent of the children of the Stephen King adaptation Stand By Me. Things get even more mysterious when they come across a girl who doesn’t seem to be able to speak. As they try to communicate with her, they discover that she has telekinetic abilities and that she could help them find their friend. 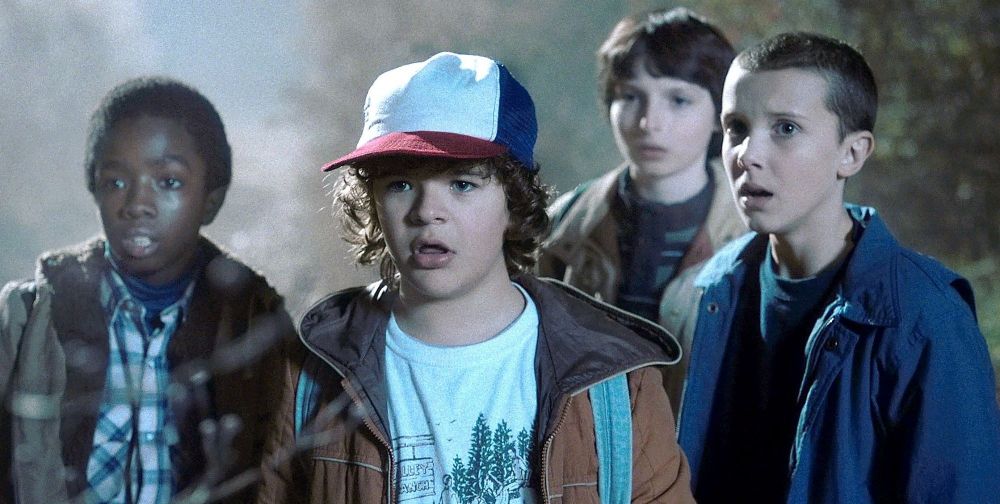 Stranger Things is typical Stephen King fiction. Its not just about strange or weird things, that have a supernatural angle. Its also about the effect people have on each other and on their actions. The very definition of mystery that we had been missing, is beautifully executed, gripping you to each and every scene. The camaraderie of the kids as they act even more maturely than the adults is infectious. In fact, in the Duffer Brothers own words [not sic] – “The very first scene where the kids – Will, Dustin, Mike and Lucas are playing the board game is perhaps the most glorious moment for us throughout the series. It is just so natural and fluid that its almost impossible to recreate.” The brilliant first season is just eight episodes that would force you to binge on and at the same time give you a self-contained story that would not leave you gasping until the next. Season 2 would most probably be a continuation of the characters albeit with a new self-contained story.

Stranger Things is typical Stephen King fiction. Its not just about strange or weird things, that have a supernatural angle. Its also about the effect people have on each other and on their actions. The very definition of mystery that we had been missing, is beautifully executed, gripping you to each and every scene.

Although it would be really tough for the creators to surpass the first season, we would really, really love to be proved wrong !

gobblpoint: Touted as one the best Netflix originals so far, this one has all the elements of a great mystery, nostalgia and an amazing story rolled into one deeply impactful production.

Disclaimer: The images used in this post are the sole property of the makers of the series and are not owned by us in any form whatsoever.