The Da Vinci Code introduced us to the world of Robert Langdon and the religious iconography and symbology he used to decipher cryptic messages, all the while saving humanity from rogue cults and misguided fundamentalists. Three years later, director Ron Howard returned with the second movie based on Dan Brown’s book  Angels and Demons. This movie was an improvement of sorts, as in this salvo, Robert cranks up the action by being on the run as the movie progresses in rapid strides. Both these movies were successes at the box office, although in terms of critical acclaim, they were mostly panned for missing the essence of the novels.  The latest offering, Inferno, keeps most of the ingredients from the previous movies intact, but in terms of impact, this one seems to be way off target.

Tom Hanks as Robert Langdon brings a certain gravitas to the role of a professor-turned-mystery solving whodunit investigator. As much as some of the references seem implausible, Hank’s honest portrayal  of a professor and his pedagogy, gives the audience the trust which such overscrupulous writing desperately calls for. The director assumes that the audience is smart and does not intend to spoon feed in most of the scenes. He expects us to know Dante’s Inferno and Boticelli’s Map of Hell and also carries us through several countries as Robert and his accomplice Sienna try to decode the clues to the Inferno which looms on humanity. The subject of this book and the movie is relevant to the average audience. The global issue of exponential  population growth is something which needs urgent addressing. And one easy and barbaric way of solving it is culling the population through extreme measures, which is exactly what a transhumanist billionaire Bertrand Zobrist is upto in this movie. Zobrist created a virus which he intended to release among humanity and solve the population concern in one swift wave of mass culling.

The movie starts with Langdon finding himself in a hospital under the observation of a young doctor Sienna and with a hazy short term memory. The movie gathers pace immediately, as Langdon is attacked by a police woman and he is saved and frisked away by Sienna who takes him to her apartment. As Langdon struggles with vision of death and Hell-like imagery, he finds a medieval bone cylinder with a hi-tech projector that displayed Boticelli’s Map of Hell based on the famous Inferno by Dante. Both Langdon and Sienna are convinced that the government wants him dead for possessing the Map and the clues which it hides inside. As Langdon plays cat and mouse with the cops and the WHO representatives, the sinister ploy to unleash the “inferno” on humanity is clear to him and he also realises that everything he sees around isn’t what it appears. 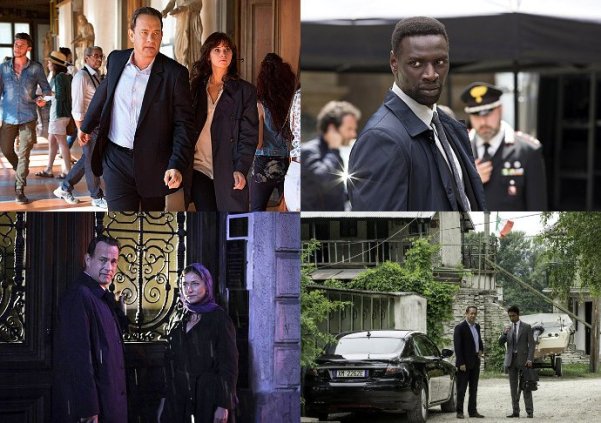 The main problem with the movie is the predictability of the premise. As much as the director tries to intricate the proceedings with hidden meanings and plot twists, it remains a simple story of running against time to stop a virus-bomb. Also, unlike the previous movies in this series, the audience is not invested in the unscrambling of the puzzles at every corner. Once we stop caring much about solving the case along with the protagonist, the movie ends up being a drag as the final outcome is a forlorn conclusion. Also, unlike the book, the movie takes short cuts to complete the story arcs. The climax of the book is engaging and the outcome is a tad heartbreaking yet an eye opener to the self implosion which humanity seems to be triggering. The movie takes an alternative route to culmination with a focus on making it appealing to the masses.

Irrfan Khan as the “Provost”  is one of the high points of the movie. He gets the witty one-liners and delivers a solid performance as is generally expected from him. He is gradually turning out to be a bankable actor who is making strides in Hollywood and not just in blink and you miss roles.

Ron Howard’s filmography boasts of some really good movies like The Beautiful Mind, Rush, Apollo 13 etc. Tom Hanks has been a regular feature in his movies and the veteran delivers another power packed performance in this one. But the screenplay and the short sighted vision of this movie lets him down. The locations have been another talking point in these adaptations and the director succeeds in capturing the historical artefacts and monuments of Florence, Hagia Sophia and Venice. But all in all, Inferno fizzles out far too quickly. And unfortunately, this has been the case with all the adaptations of the Dan Brown novels.  The Lost Symbol is the only remaining novel which features the character of Robert Langdon, and we just hope they do justice to the book whenever they plan on adapting it.

Disclaimer : The images used in this post are the sole property of the makers and are not owned by us in any form whatsoever.