I have a confession to make. Some of you may find it laughable in today’s Electro-pop Age but I have got to come clean. My first ever exposure to any semblance of westernized music was Mithun da’s classic “I am a disco dancer“. There, I have said it. You can cringe away my friend but Mithun in his Elvis Presley tights and an Electric guitar which he so adeptly waved away in the air, was the gold standard for “Western Music” at that time. Bappi Lahiri inadvertently changed Bollywood music forever with that one sound-track which re-wrote all rules on how Bollywood Music was supposed to connect to its audience. That was 1982…

26 years later, Rock On !! bestowed upon us a kind of music which had its roots in alternative rock but communicated to us in a language that we could call our own. The elusive high-society, bourgeois gap that had made Rock a legacy accessible only to a select few had now been bridged and handed down to the masses. Abhishek Kapoor’s story about four talented musicians in their proverbial struggle to escape from the humdrum monotony of work-life and their journey to reclaim their music as they navigated their personal flaws, instantly struck a chord with us. 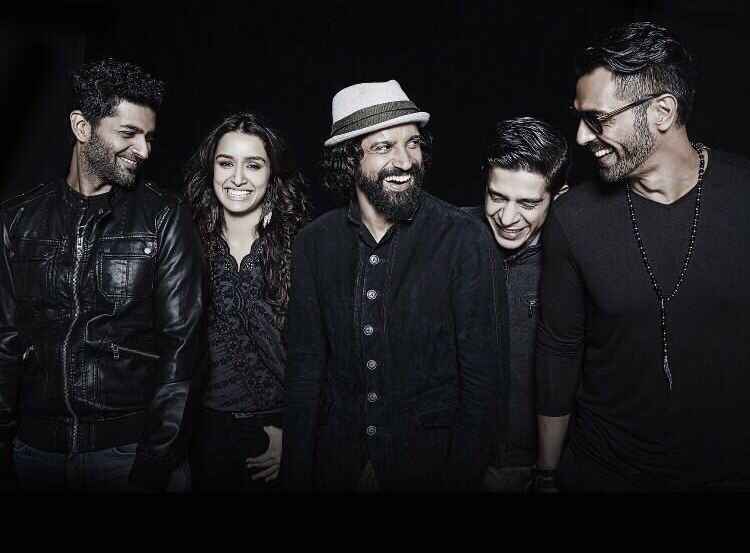 Shujaat Saudagar’s Rock On \m/ (or Rock on 2) elevates this story to a more true-to-life visage. After achieving immense success for a brief period, Magik has now disbanded and hasn’t been heard for several years. Joe has turned entrepreneur with a Production House of his own and a few other Business ventures including being a judge on a Music Reality show. Adi has left Mumbai and now lives in a small village in the bucolic hills of Meghalaya, helping out poor farmers and trying to live a simple life. KD is the only one among them who is still composing music albeit for people who do not understand or appreciate his work. However, there is a dark undercurrent which has led to this estrangement as we get to see through Adi’s recurrent nightmare about the suicide of an aspiring musician whom he had failed to notice. I was constantly reminded of Eminem’s Stan throughout the film, but thats probably just me.

In a parallel arc, Jiah Sharma played by Shraddha Kapoor is the daughter of a renowned Indian classical musician Pandit Vibhuti played by Kumud Mishra and has grown up in an orthodox household where western music is considered to be noise and nothing more. Uday Mishra played by Shashank Arora is a struggling but talented musician who presents himself before the Pandit offering himself under his tutelage. Although he makes a mark through his soulful performance on the Sarod, he is coldly rejected by the guru as he has now retired. Jiah approaches Uday and asks him to lend his music to a track she has been secretly composing but admits that she has no intention to perform it ever on stage. With hopes of getting his work recognized and to get a break, Uday submits the CD in Joe’s production house without Jiah’s knowledge.

Things take an interesting turn when Jiah and Uday get a call-back from the production house. Uday somehow convinces Jiah to do the performance to help him out but Jiah’s inherent fear of her father, results in her bailing out at the last moment. Joe is enraged after the disastrous show in front of a full audience and demands an explanation. Uday, while apologizing profusely, professes that Jiah is the daughter of that musician whose son had committed suicide a few years back. Life comes full circle for Adi, Joe and KD as the very incident which had broke them apart at one point, now stands before them demanding redemption.

Rock on \m/ takes the journey of alternative rock to a much more enriched fusion with the introduction of the Sarod. This unconventional association with Rock astoundingly complements the popular no nonsense lyrics which we have come to associate with these films.

Rock On \m/ is a beautifully shot film. From its macro angles to its tight screenplay, the narrative is fluid and mature. Belgian cinematographer Mark Koninckx’s exceptional portrayal of North-East as well as the characters themselves, brings out a story which has moved on since their early days. Rock on \m/ takes the journey of alternative rock to a much more enriched fusion with the introduction of the Sarod. This unconventional association with Rock astoundingly complements the popular no nonsense lyrics which we have come to associate with these films. Although the music has not been very well received by the audience yet, I say, give it time to grow on you. Some of the tracks such as Jaago, Udja re, Manzar naya and even the Meghalayan folk song Hoi Kiw/Chalo Chalo made quite an impression on me. Tere Mere Dil is the new Tum Ho toh. Shankar-Ehsaan-Loy do not disappoint !

Aside the amazing chemistry between the original band-members Farhan, Purab and Arjun, the real stars in this film have to be Shraddha and Shashank.

Aside the amazing chemistry between the original band-members Farhan, Purab and Arjun, the real stars in this film have to be Shraddha and Shashank. After underplaying under-written roles in various films, Shraddha’s portrayal of an individual who had been languishing under the dominant shadow of her father is earnest and her struggle is heart-wrenching. Shashank Arora who first made his debut through the dark comedies Titli and Brahman Naman, gives yet another powerful performance in the limited screen space that he gets. Kumud Mishra’s portrayal of a broken musician and a strict father would, perhaps, resonate with every Indian household. Despite having a plethora of characters spanning two different story arcs and generations, each has been given the due development which is so crucial in any kind of drama.

Rock On \m/ does not have those high-contrast monotone color palettes that gave such a character to the first film but it has more soul in it. The music feels more integrated into life. Every aspect of the film has been infused with a purpose and it just makes sense. Drama does not need to explain itself but here we understand why a character reacts in a certain way and we care for that. To be honest, I was not sure what more Rock On could give to us. The first film was complete in itself and sequels more often than not break that goodwill. Rock On \m/ confounds that theory by re-inventing what it stands for. It is again a complete story within itself. True, the characters are not new but are you the same person now as compared to what you were a decade back ? Think about it…

gobblpoint: Watch it for some of the freshest music there is, among the same old Arijit-style songs that are so prevalent, and a heart-warming story about overcoming your insecurities, reclaiming lost friendships and accepting life as it is.