Conversationally good movies engage the audience through the basic yet cardinal method of propelling the story through a series of interactions which appeal to our intellect. From classic examples of Hollywood like the Before series, Annie Hall, Carnage or The Man from Earth to the Bollywood counterparts like Choti Si Baat and other movies from the stable of legends like Hrishikesh Mukherjee and Basu Chatterjee, such movies have the power to give perspective and make the audience think. Gauri Shinde’s Dear Zindagi is one such movie. Superficially it is the story of Kiara who is trying to make a career out of movie making (as a  Director of Photography to be specific) and the  relationship turmoils and indecision which grip her. But this could have been any girl’s story. Such is the universality of complex relationships in today’s day and age, that every girl can relate to some part of what was being shown on the screen. From hopping from one contrite relationship to another, to figuring out her career path, Kiara’s story is the story of most “urban loners”. There is one scene where Kiara, all alone in her apartment, closes her eyes and keeps repeating to herself that “everything will be alright”. That scene was pivotal in showing how the socially connected yet physically distant generation has to console themselves in solitude. Till it reaches boiling point that is.

Alia Bhatt is fantastic as Kiara. She is vulnerable, staunch, indifferent and an emotional mess in a performance which may catapult her to a few award nominations this year. From playing the hollow Shanaya in Student of the Year to rediscovering herself in acting-heavy roles in Highway, Udta Punjab and now in Dear Zindagi, this star kid is making a niche for herself. So much so that in few of the conversations between her character and the character of Dr Jehangir Khan played by Shah Rukh Khan, Alia trumps the legend for a few seconds. This is also as a result of the measured and toned down performance by Shah Rukh himself. Playing second fiddle is not what we expect from the legend. Yet, here he is perfect in the role of the Psychotherapist who helps Kiara get a grip of her relations with some good counselling and support. What stands out in this movie is the chemistry between both Shah Rukh and Alia. Without giving any amorous angle to the proceedings, director Gauri Shinde perfectly lays bare the internal duel which does not allow Kiara to have a good night’s sleep and how her therapist understands her misgivings and directs her to a “cure”. 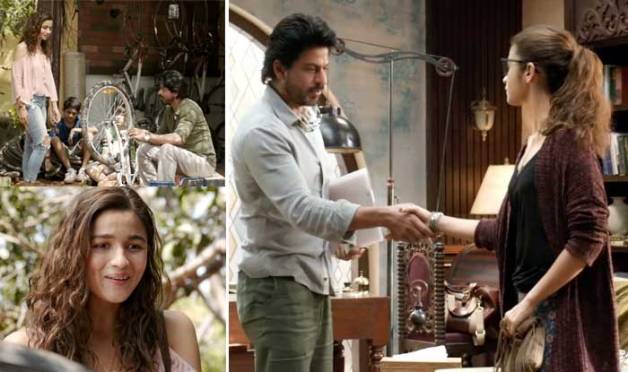 Gauri Shinde’s filmography reads English Vinglish and Dear Zindagi. But she does not show any nerves of a newcomer in her second outing. To be honest, the movie is not without its failings, yet, it is a decent job, considering the non-glamorous nature of the script. She captures the lead’s emotions through a series of close ups which highlight every single feeling emanating from Kiara’s face. The best example of this are her interactions with her 3 boyfriends in the movie. Each of those relations seem unfulfilling to her and as the guys try to serenade her through their individual charms, we see her face change from indifference to irritation to plain anger. Even with Shah Rukh, Gauri Shinde brings out the calming effect of a wise therapist who weighs Kiara’s fragile relations and tries to delve into her psyche to find answers for her. Rest of her characters also perform decently, specially Kunal Kapoor as Kiara’s lover and Yashaswini Dayama as her best friend Jackie.

A special mention must be made about the scenic beauty of Goa captured by the D.O.P Laxman Utekar. The backdrop is calm and serene and helps in Kiara finding her answers. Although the palpable void of people on the beaches is so unlike what Goa is, 365 days a year. The music is nothing to take home with, although the introduction of Ali Zafar in a cameo as a singer and prospective lover brings a breath of fresh air. But as an audience, we quickly realise that he is just a passing phase in Kiara’s story.

Dear Zindagi is a film which appeals to the intellect. The script could have been tighter and a late focus on giving it an amorous angle is uncalled for. The first half breezes past as we get to see all that is going wrong in Kiara’s life and the spokes which make the wheel of her life. With the entry of Shah Rukh, the story takes a delightful turn and expectations soar for the second half, but sometimes, those very expectations pull a movie down a few notches. Nevertheless, this is a movie which deserves a viewing. Matured, intelligent and having really quality performances, Dear Zindagi firmly puts Gauri Shinde in the list of “Directors to watch out for”.

gobblpoint: One of the best leading performances by a female this year should be enough to take you to the theatres.