World War II was the greatest travesty towards humanity in the modern world. Taking birth from the broken ramparts of World War I where a group of young rebels preached against the capitalist and bourgeois establishment, the Nationalsozialistische Deutsche Arbeiterpartei or better known as Nazi Party transformed into a group which aimed for a high-bred industrialist Germany. Under the tutelage of Adolf Hitler, Anton Drexler and Martin Bormann began a systematic genocide which would murder at least 6 million jews over the course of 6 years. Horrifying stories of human torture have emerged from major concentration camps like Auschwitz from eye-witness accounts of survivors and from chance photographs of the Third Reich which captured the “success” of their little operation with élan.

From a Film-maker’s point of view, World War II and Nazi Germany provided hundreds of stories about strong-willed people who stood against the Reich in any way they could. From Polanski’s The Pianist and Spielberg’s Schindler’s List to more mainstream films such as Bryan Singer’s Valkyrie and Tarantino’s Inglourious Basterds,film culture is replete with hundreds of adaptations of  true accounts which project the invincible human spirit in all its glory!

Adapted from a book by the same name by Diane Ackerman, The Zookeeper’s Wife is directed by Niki Caro and narrates the journey of a Zookeeper’s family in Warsaw, Poland as their city is ravaged by german war machines. Dr. Jan Zabinski and his wife Antonina are ardent animal lovers whose life revolves around nurturing and protecting the beautiful creatures as poignantly portrayed in a scene where Mrs. Zabinski is called off from a social gathering as one of their female elephants had given birth to a stillborn. The scene shows an agitated long-tusked African elephant trying to revive her baby by pushing the still body. Believing that she could still save the baby, Antonina rushes into the midst of the giant tuskers and tries to free its choked airway through the trunk. Even though the mother elephant tries to push the woman aside as an involuntary instinct to protect its child, Antonina keeps at it and is finally able to save the baby. This single emotional moment when the mother is united with her child, establishes the calibre of the Zabinskis as people and the kind of value-system they possess. 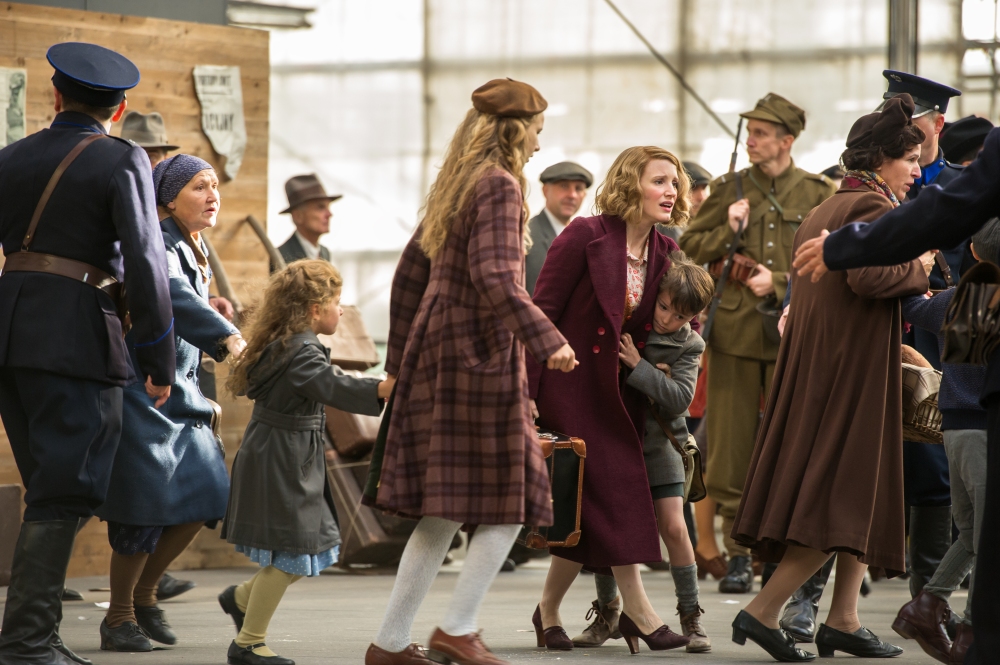 It was 1939 when the face of Warsaw started to change as german military forces started moving into the city. German air-strikes became a common occurrence as parts of the city were devastated. The zoo also fell prey to one of the strikes, killing several animals and releasing several others as their enclosures were destroyed. Fearing attacks from lions and cheetahs running amok on the streets, the militia gradually shot and killed all the animals which were roaming free, right in front of the hapless eyes of the Zabinskis. As portrayed so heartbreakingly in The Pianist as well, Warsaw is divided into two parts by a brick, barb-wired wall separating the city from the ghetto where the jews were forced to live without food, water or shelter. The Zabinskis, being non-jews, were allowed to keep their home but were told that their zoo would have to be “liquidated” for the “war-effort”. In an attempt to save it, the Zabinskis approach Lutz Heck, Hitler’s Chief Zoologist with a proposition to convert the zoo premises into a pig farm so that they could supply meat to the german soldiers and keep the zoo in return. They also ask for special permission to go into the ghetto to collect vegetable peelings so that they could feed the pigs. Lutz is convinced about the merit of this operation and allows them special sanctions for the same. Driving into the ghetto day after day, Dr. Zabinski is stricken by the deplorable conditions in which the people lived, scrounging for bits and harassed by the german soldiers all the time. Unable to stand the inhuman torture any longer, he starts hiding people in his truck under a layers of vegetable peelings and brings them home, hiding them under his basement. While Jan would be away in the ghetto all day, Antonina would care for her “guests” and give them all the care and support they needed. Soon their home becomes a sanctuary for the jews much like Anne Frank’s household. Reminiscent of Schindler’s List, the Zabinskis were able to save some 300 people from being taken away to concentration camps and the gas-chambers.

Johan Heldenbergh brings in a lot of authenticity on screen as Dr. Jan Zabinski, a zoologist whose compassion for animal emanates into his humanity for people too. Heldenbergh gives a measured performance showing his deep disgust for the Nazis and also as a messiah who nonchalantly brings in scores of people into his home every week. Jessica Chastain, who has grown up as an American sweetheart, gives one of her better performances as Antonina Zabinski through her unassumingly simple principle that all living beings deserve care. Her character firmly believes that there is no pretense with animals however dangerous they may be. You can just look into their eyes and know exactly what’s on their mind, unlike humans who maim and kill their fellow brothers and sisters to uphold the twisted philosophy of a madman. Chastain brings in the caring touch of a woman and blends it with the fierce resolve to rebel against the establishment. Daniel Brühl’s character as Lutz doesn’t get as much screen time as I might have expected from an actor of his calibre. Being a Nazi officer, Brühl changes a from a simple snobbish zoologist who seemed to care about animals into a cold, hardened officer who didn’t blink an eye before shooting an animal.

Although the director addresses a range of perspectives about the struggle of the Zabinskis, I was not entirely convinced about the title of the film. From the title, you would expect a singular woman protagonist who would challenge the forces but the narrative shows you a different picture altogether. We get to see lot more screen effort from Dr. Zabinski than Chastain, who is shown to be very much emotionally dependent on her husband to carry out their covert refuge. Its only during the final few moments of the film when we see Antonina become the leader when her husband had been wounded during the protest wars. There are a few more unanswered questions that leave you unconvinced about the Doctor’s plans. Through an acquaintance, he manages to bring people with him on pretense that they were labour for his pig-farm. For that, they had to prepare legal documents and pass through an office full of Nazi staff to get to the free-zone. It’s interesting how not one of these digressions were reported to the militia during the years they managed to carry out this plan. 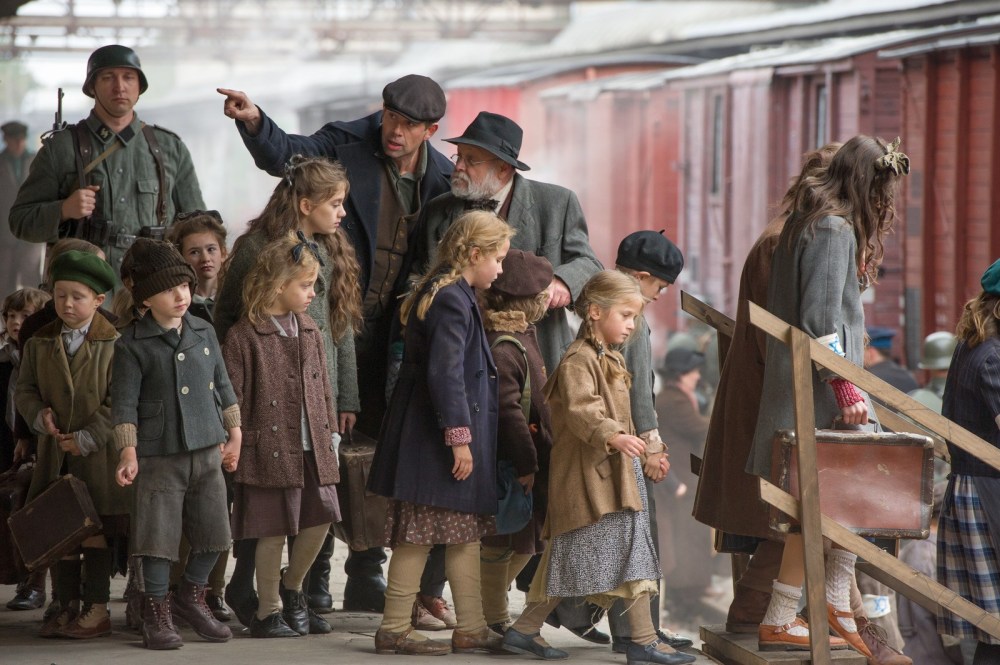 Besides showing the similarities of the holocaust from an intriguing perspective of a zoo where animals are caged just for recreation, Niki Caro projects symbolism into the film too. While the city is being bombed the Zabinskis transport some of their animals to Berlin so that they could survive the war. As they load the animals in pairs on a truck, you can’t help but think of Noah’s ark during the great deluge. This symbolism repeats itself again in the ghetto when Dr. Zabinski hides people on his truck to save them from death, a Noah’s ark for humans. The film is also about contrasts as shown in one scene where Zabinski tries to convince a fellow Doctor to leave with him in his truck. Instead the Doctor asks him to help the little orphans he has adopted to get onto the train leaving Warsaw. Zabinski knows very well what fate would befall them at the end of that train-journey but he is helpless. So he quietly helps them to board the train as one by one each child raises its arms asking to be carried and placed on the train. This is, perhaps, one of the most heartbreaking scenes I’ve come across since the gas-chamber scene in The Boy in the striped pajamas.

Caro tells a heart-warming story of suffering, humanity and love through the eyes of people whose sole focus in life were animals. Even though they had no business helping the jewish community, they saw how inhumane and unfair the acts were. They felt responsible for them, enough to bring them to their own home and risking the well-being of their family. The Zookeeper’s Wife is a welcome addition to the plethora of Nazi Germany films and aptly shows the triumph of will over force.

Catch the story from one of the survivors who had hid in that zoo here in this interesting documentary:

gobblpoint: Watch it for a unique perspective on the holocaust and a heartwarming story that shows the importance of sticking together as a family.