S S Rajamouli’s ‘Baahubali 2: The Conclusion’ is an attempted magnum opus which thrives and at the same time is a victim of its own hype. From the time Baahubali 1 : The Beginning hit theatres in 2015 and became a success story , the anticipation, discussions and debate among the masses about the conclusion to this saga reached a zenith which very few movies have. Social media was abuzz with theories surrounding the reason why Kattappa (loyal servant to the king) killed his master, Baahubali. Despite the movie being in Telugu, it found a loyal Hindi audience base which has been craving for a good historical drama since ages. Bollywood has been quite pessimistic when it comes to producing epic historical sagas. The few which come to our mind immediately are ‘Bajirao Mastani’, ‘Jodhaa Akbar’, ‘Mohenjo Daro’, ‘Veer’, ‘Mughal-E-Azam’. Half of the names I took were duds at the box office due to the failure of the director to look beyond scale while failing to focus on the one simple aspect, story. S S Rajamouli is a master at making period dramas with all the grandeur and larger than life characters with entertainment as the central focus. His Magadheera was a resounding hit across the country and must have been the benchmark while convincing the producers (including Karan Johar) to invest more than 250 crores for the two part series. The immense hysteria among the masses means that once again the producers will dance all the way to the bank. 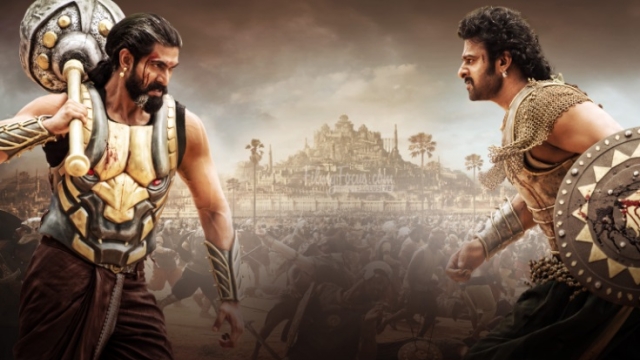 Rajamouli is singularly focused on bringing the masses to the cinema halls to watch this movie. Anyone who has seen the first part will know that this epic drama unfolds best on a large screen with popcorn in your hands. The VFX used in the movie gives it an unparalleled look with special focus on the action sequences. The sets are as lavish as they come and the kingdoms of Mahismati and Kuntala will take your breath away with their near perfect vista of flora and architectural marvels existing in harmony. In fact, the very first scene of the movie prepares you for what to expect in the next three hours. A giant elephant goes rogue and threatens to kill the Queen Mother Sivagami. Enter Baahubali (Prabhas) in all his glory, flexing muscle while showing his devotion to his mother at the same time.

Prabhas uplifts Baahubali 2 from the utter mess it would have been reduced to due to the weak script. He gives his heart and soul to the lead character and the audience gets their hero to root for. Rajamouli overdoes the righteous son and defender of the poor routine but Prabhas somehow manages to stop us short of cringing. The first half is an uneven and meandering journey of establishing the Mahismati royal family and the surging revolt in the hearts of the crippled king and the eventual villain, Bhallaladeva. Ramya Krishnan as the Queen Mother is strong but is manipulated very easily by the slightest pretext and umbrage. So much so that the entire story feels like a result of a few stupid decisions made by her. This brings us to the story of Baahubali 2.

My focus on the VFX, Prabhas and other characters before even delving into the story is intentional. The story has nothing new to offer. Even the most puzzling question left unanswered in the first film “Why did Kattappa kill Baahubali?” is explained in the most unremarkable way. In fact, some of the ideas discussed on social media are better and more intriguing.

Check out the thread below, which has few smart theories about the question.

The story takes second fiddle to the action set pieces and charisma of the actors. Rana Dagubatti is almost silent throughout the first half, giving ample chance to Prabhas to regain the audience’s love which was pivotal to the success of the first installment. Anushka Shetty is a transformed lady in this one after playing the helpless mother in the first film. She is shown as a princess of the kingdom of Kuntala who is adept at combat and instantly takes the full attention of Baahubali. In fact both the leading women in the movie come across as strong as their male counterparts.

The climatic fight between Baahubali and Bhallaladeva is detailed and involves some of the most outrageous war gambits you will ever see. At one point, even the most ardent action movie lovers will be left gawking at the total craziness on display with respect to what the humans are shown doing on screen. Towards the end, you will feel that there are hardly anything Baahubali cannot do. The fight scenes are well choreographed and the synchronized sequences, one involving Baahubali and Kattappa killing few men in Kuntala and the other involving Baahubali and Devasena fighting the enemy with bow and arrow are nicely done.

Baahubali is a story which will remain in the minds of the audience for long. Not every day you see such grandeur and lavishness in an Indian movie. If you do not deep dive into the failings, this is decent fun to watch on a big screen. S S Rajamouli must be commended for getting the audience connected to his movie to such an extent and making a word of mouth phenomena like no other.

gobblpoint : This movie begs to be watched in a good theatre. If you are going only to find out why Kattappa killed Baahubali, well you might be a tad disappointed, but watch for the expensive VFX and fight sequences and you might come out without much disappointment.
Disclaimer: The images used in this post are the sole property of the makers of this film and are not owned by us in any form whatsoever.