Before we even begin, let’s address the elephant in the room rightaway and get it over with. I am a non-vegetarian. And a proud one at that. Have you seen those people who get riled up on facebook when one of their friends posts a cocky pro-vegan status beckoning all non-vegetarians to war ? Yes, I am one of those. There’s many a social media debate that I have proactively jumped into, just so that I could – “give a piece of me to those vegetarian pussies !”. Those are more than just proud remembrances for me. Oh no, they are trophies Norman Bates would be proud of. Those are a badge of honor that I would fondly reminisce when I am ninety years old and dying, smiling a wicked smile while my grandchildren would point towards me and say to their parents – “Mommy, I think grandpa peed in his pants again.”

Keeping aside the false pride that us non-vegetarians carry around with petty arguments such as “Paneer ke alawa aur kuch khate bhi ho ?” (Do you even eat anything else besides Tofu?), the age-old debate on Veg v Non-veg : Dawn of Hummus is fascinating in itself. A die-hard defender of meat-pride like me would say – “But human beings are omnivorous animals aren’t they? Why would nature give us the means to digest meat if we aren’t supposed to?”. Well, this argument would have held well in the recent past somewhere around 9000 B.C. That’s when our primitive ancestors spit out some seeds onto the ground near their hut. Lo and behold, spuds started to come out. Now, they could have as many potahtoes as they wanted. The point is – meat was necessary when there was no alternative. That was a time when Mr. Protein would most likely kill you with its horns if you didn’t kill it first. Also, did I mention the Ice Age?

Meanwhile, check out this hilarious video from Scoopwhoop:

Today, food has become a corporate gimmick. McDonalds and KFC have done to food, what the iPhone has done to the phone. You don’t call it an Apple phone or a phone from Apple. You call it an iPhone. In the same breath, now we have Big Macs and Buckets. Food has taken over a part of our identity as a person. We have “affiliations” now. Friendships are made or slayed over Pizza Hut or Dominoes.

Today, food has become a corporate gimmick. McDonalds and KFC have done to food, what the iPhone has done to the phone. You don’t call it an Apple phone or a phone from Apple. You call it an iPhone. In the same breath, now we have Big Macs and Buckets. Food has taken over a part of our identity as a person. We have “affiliations” now. Friendships are made or slayed over Pizza Hut or Dominoes.

The first time I started thinking beyond the food on my plate, was when I came across this eye-opening documentary called Food Inc. made by director Robert Kenner. Aptly titled, the academy award nominated documentary reveals the ugly side of the American Food industry. The disconcerting footage interspersed throughout puts the spotlight on the highly competitive supply chain that is established by the big businesses forcing farmers to use highly unusual methods to increase the yield. And I am not talking crops here. Food Inc. showed how animals are systematically bred to inherit bulkier forms from the previous “batch” so as to produce more and more meat in the shortest possible time. They live in unhealthy atmosphere amidst squalor and in some cases fed the remains of other animals of the same species. Yes, you read that right. That’s just scratching the surface.

You can catch the documentary here for an “unflattering look into America’s corporate controlled food industry” as IMdb puts it:

Directed by Bong Joon-ho, Okja presents a comic take on this corporate greed through unassumingly simplistic ideas that do not need complex scientific explanations to hit home. The story revolves around a 10-year old girl named Mija and her friend Okja, who is a giant chubby-bubbly genetically modified pig. Presented to Mija’s family as a piglet, Okja was one of the 26 “super-pigs” which were given to 26 farmer across the world for rearing. Despite it being an experiment, Mija loves Okja as her own family and shares a unique bond with this hippopotamus-like creature. 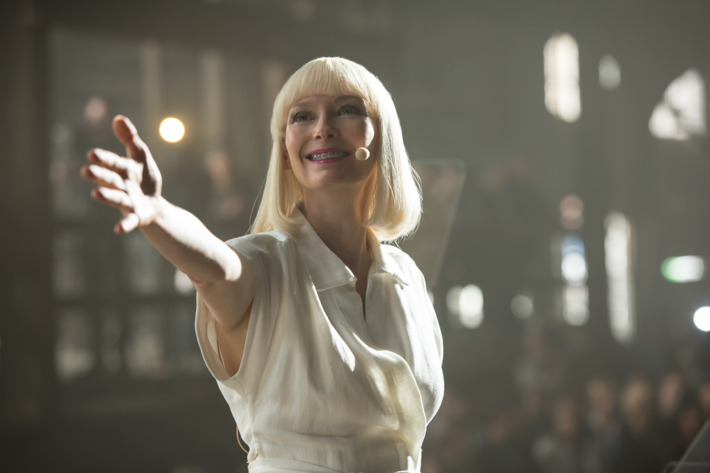 Mirando, the corporation which created these GM pigs, is led by a psychopathic CEO played by Tilda Swinton who brands this campaign as a race for the “#1 Super-pig”. Through the farcical fanfare that follows, the corporation never shows the real face of the operation i.e., the systematic butchering of those mass-produced super-pigs and supplying them in scraps to the highest bidder. When Okja is taken away to Seoul by Dr. Johnny (played by Gyllenhaal), an eccentric TV presenter pretending to be an onscreen Steve Irwin, Mija follows in pursuit to save Okja from being killed.

In Seoul, Mija is caught between a tussle between the corporation and the Animal Liberation Front which is a band of animal rights activists who are also trying to rescue Okja. Throughout the melee that ensues, Mija finds herself peering behind the blinds into Mirando’s “farms” where other super-pigs like Okja are being beaten, shocked and slaughtered. As she faces the truth of how food is made, we see the truth too.

I found it really interesting that of all animals it was a pig that was chosen to be the GM animal here. Considered to be one of the filthiest of animals, and considered impure in some of the major world religions, the film makes a statement in terms of creating empathy towards an animal which is so despised. The fact that you actually start rooting for Mija and Okja brings forward our silent hypocrisy wherein we chose to selectively kill some animals while making others our pets. Besides this deep-rooted moral dilemma, the film also addresses an unspoken aspect of the food industry where research is being done to produce more meat by killing fewer animals. Okja laudably brings this ridiculous pseudo-solution which is trying to cover the black mark on the wall by painting the whole wall black. The point it tries to make is – Killing animals is bad, not just because it causes pollution and greenhouse gases; killing them is bad because it is fundamentally taking the life of a living, breathing creature.

It is heartening to see that such impactful films are being supported by mainstream actors and media platforms like Netflix who have a much larger circle of influence. Food Inc. also gave a powerful message but unfortunately documentaries don’t usually reach a mainstream audience like films do. With some incredible performances from child actor Ahn Sen-hyun as Mija, Swinton as Lucy Miranda and Jake Gyllenhaal as Dr. Johnny, Okja grabs your attention from the very first shot and drives home the message into our thick non-vegetarian skulls. You can’t help but go through a guilt-trip when Lucy Mirando proclaims to her goons – “Everything is edible ! Except the squeal.” Paul Dano, who plays Jay, the leader of the activist group, authentically projects the polar opposite of the equation turning the film into a clash of ideas as well.

I know, I know you are looking at me with questioning eyes, I being a proud non-vegetarian and all. Would I give it up right now? Probably not but give me some time. It’s not easy, but I am probably going to try. If you have any non-veggie friends, you’d appreciate how big of a statement that is. Am I really giving up something? Yes, but imagine what I am gaining. I love animals especially cats and dogs. Now I want to expand my sphere to all of them four-legged buggers.

I don’t know when I am going to call myself a true vegetarian but this I know for sure. I would be prouder than I ever was!

That’s what Okja does to you…