Jagga Jasoos gives you an instant feeling of a movie conceptualized by a painter who just happened to be hindered by an uninspired VFX team and a studio who was bent on pushing him to make this a magnum opus. Anurag Basu’s film uses brushes instead of cameras to create the visual illustrations around the characters. I can use the most pompous of words but I will still fail to explain the colourful ambit of this movie. This is Bollywood trying to experiment in a mainstream movie with both scenery and the auditory. And we give a thumbs up for the effort. Anurag Basu has found a muse in Ranbir and in both the movies they have worked together in, Ranbir has been pushed to attempt something which is both endearing as well as challenging simply because one wrong note and the entire movie could have fallen flat, as Katrina does, both literally and figuratively.

Jagga Jasoos has been 4 years in the making. The delay in the release was both due to the change in the personal equation of the lead actors as well as production issues, which even forced Ranbir Kapoor to become one of the co-producers of the movie. Now that the movie has seen the light of day, I am sure it will serve as a precursor to a lot more imaginative filmmaking from Bollywood. I remember a movie released back in 2002 where Govinda and Kader Khan sang out their dialogues, a movie named Waah! Tera Kya Kehna. And I was offended by the sheer imbecility on show. Truth be told, I was a bit skeptical going into this one as well, as I had already heard this is a musical adventure movie. But within the first 20 minutes, my reservations gave way to admiration as I saw the brilliant Saswata Chatterjee and a young Jagga bonding on some really sweet verses. As I relaxed into my seat, few things grasped my attention—

Thank you Anurag Basu for taking us on a brief Northeast India tour before embarking on the roller coaster in foreign lands! Rock On trailed a blaze last year in showing the musical inclinations of Shillong, although I doubt how many of you have actually seen the movie. But Jagga Jasoos covers two beautiful states, Manipur and Assam in all its ethnic grandeur and picturesque locales. And how fitting is that in a musical like this, Basu also includes folk songs from both the states. Kudos to Pritam for the diversity in the music.

For every acting note Ranbir touched so effortlessly, we had to endure a laboring Katrina, first trying to get the dialogues right and then trying to juxtapose expressions almost invoking pity in few of the portions. I concede, she tries her best and because of her beguiling charm, the audience can be fooled into thinking that is how the character presentation demanded. But you know ‘average’ when ‘outstanding’ is standing right by it’s side. And sadly for Katrina, Ranbir is simply outstanding. Ranbir is tailor-made for such cutesy and slightly trammelled roles and he gets the nuances spot on. Be it the excessive stammering or the aloof self, Ranbir owns the screen. We cannot say the same about Katrina. She has been in the industry for 15 years and more, I highly recommend a good Urdu teacher, because apparently her Hindi teacher is not making much of a difference. And yes, I noticed how director Basu included a dialogue, totally out of context, talking about Shruti’s (Katrina’s) foreign upbringing which results in an accent. Cannot pass by so easily Mr Basu! 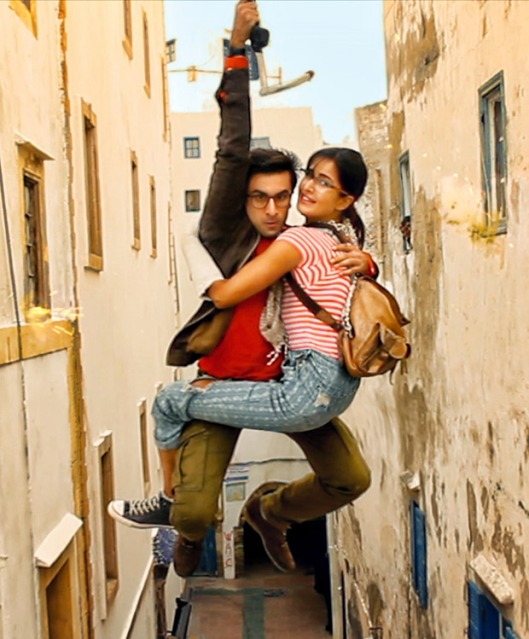 Sorry VFX takes the sheen out of the brilliant Cinematography—

In one of the chase sequences, Ranbir and his accomplice are seen riding VFX ostriches. In another, Giraffes appear and disappear at will. Here is the thing, when the audience starts looking for VFX in a movie, you know the job is not upto the mark. The cinematography being so serene, why the director allowed such average VFX to be included in the movie surprises me. I can understand, being a Disney movie, few animals here, natural backdrops there are a requisite, but not at the cost of making things look uncooked.

At 2 hours and 42 minutes, this is a movie which drags on for no reason. A crisp Jagga Jasoos would have made a great movie. As an audience, I can almost count the scenes which were unnecessary to the development of the plot. And when the viewers start looking at their watches, you know you have snapped the connection to the movie. Only thanks to an earnest Ranbir and some stunning visuals, the audience did not move out before end credits rolled on.

All in all, a movie worth watching only in theatres which itself is a big win for the Director and producers.

gobblpoint—watch this movie in a theatre. This is one of those failed experiments which augurs well for the future and is so close to being a good final product that you end up giving it a benefit of doubt.