Despite the fact that Hollywood has seen one of its slowest summers this year, 2017 has given us some of the biggest blockbusters with films like Wonder Woman, Logan, Dunkirk, War for the Planet of the Apes just to name a few. Be that as it may, if you had to baptize this generous year with a name, it would have to be the “Year of King”. Stephen King has been the most adapted writer of our times. With an ardent cult-following that has developed over the last two decades, he enjoys a space which, perhaps, no other writer does. In a world where film promotions are branded with the name of some A-list actor who’s starring in it or a hotshot director who’s breaking conventions, more often than not you’d see King’s adaptations branded as “Stephen King’s” so and so. Sounds almost like a utopian dream for a film-writer who exists like a ghost writer unless you have spent your whole life writing like Woody Allen, Jonathan Nolan, Tarantino or have found your singular masterpiece early on like Aaron Sorkin, in which case your name would be recognized as it would flash momentarily in the credits. 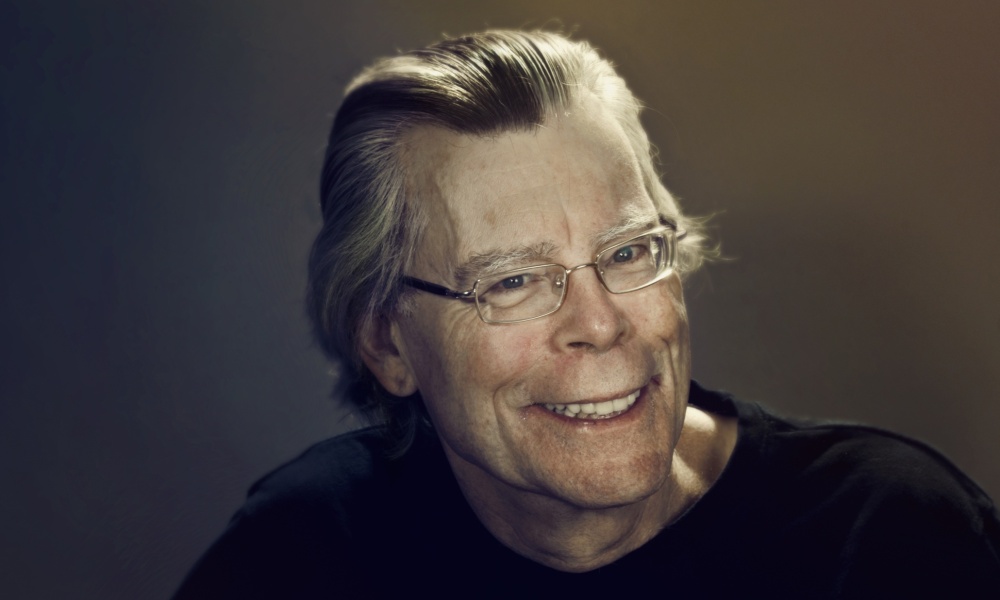 With US market earnings of over $300 million, King’s It (2017) has surpassed The Exorcist as the highest grossing horror film ever made as we speak, and is still going strong. Director Andy Muschietti has also confirmed a sequel to the runaway hit this year which is slated for release on September 6, 2019. Earlier this year, The Dark Tower, adapted from King’s best-selling series by the same name, received a lukewarm response despite having a powerful star-cast of Idris Elba and Mathew McConaughey. After all the buzz that It has garnered through parodies and memes, becoming a part of the Internet culture, you’d think that film-makers would go back to hibernation for 27 years. But now, a new player has been introduced into the ever expanding King universe.

Adapted by writer/director/editor Mike Flanagan as a Netflix original, Gerald’s Game subverts the psychological thriller genre through a twisted premise that is quintessential Stephen King. Jessie and her husband Gerald Burlingame (a jab towards Burlesque Game ?) seem to be a regular couple, navigating the turbulence of a mid-life crisis. To re-ignite the lost spark, Gerald books a cottage overlooking a beautiful lake, in all its clichéd glory. The go-getter that he is, Gerald has meticulously planned their weekend escapade. He has stocked up the fridge, gotten the house spruced up and given leave to all the attendants. A man needs a boost to stand up for himself, so Gerald hasn’t forgotten his viagra too. Jessie loves her husband and wants to work towards rejuvenating those old times when they were young and in love. On their way there, they come across a mongrel who is cleaning the bones off of roadkill. Gerald honks away the poor animal but Jessie feels sad that the poor dog has to live off rotting meat. While looking through the refrigerator, Jessie find some packets of meat and takes it outside for the dog to eat. Gerald is not a one to waste any time, so he hold Jessie’s hand and brings her inside the house as she places the meat on the porch. As they vanish into the bedroom, Jessie fleetingly notices that they had left the door open. 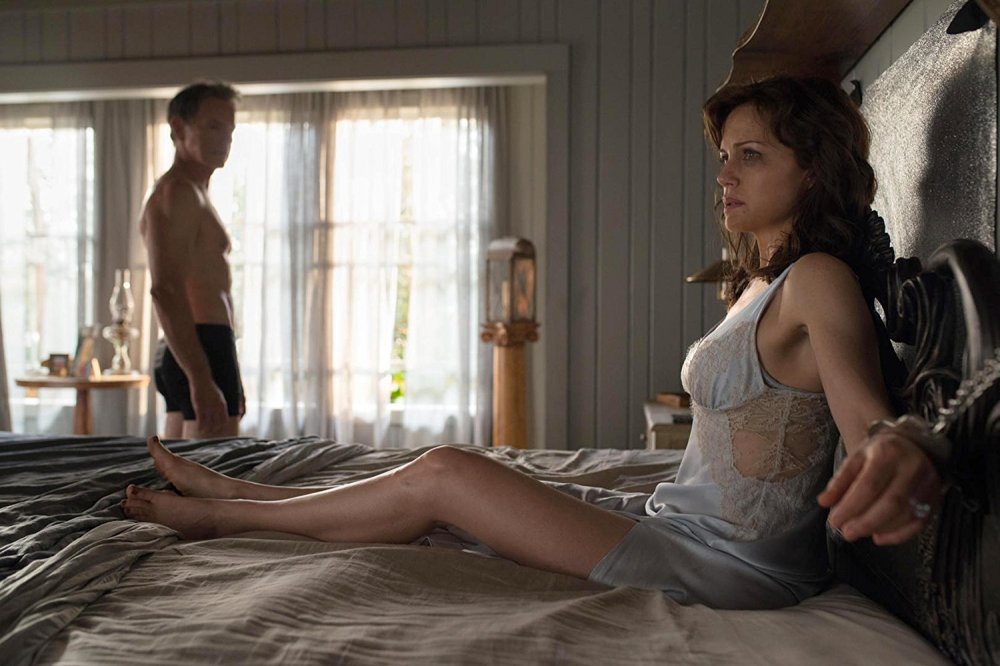 The atmosphere within the bedroom takes on an erotic turn as Gerald brings out the handcuffs. Lying there in her silk negligee, Jessie is a tad surprised as she had never seen Gerald like that. But she wants to be a good wife and plays along as Gerald clasps her hands against the bedposts, whispering sweet nothings into her ear. What Jessie thinks of as a way of spicing things up, soon turns into a rape fantasy that Gerald wants to carry out. He grabs Jessie’s throat, more realistically than she would have liked, and asks her to scream for help. Shocked and a tad traumatized, Jessie asks him to stop it right there. Gerald chuckles at first, confused if Jessie was still play-acting but one look at Jessie’s distressed face dispels all doubt. The stupidity of the whole “game” wafts up into the air as they realize that their marriage had not been working for a long time. Nothing could bring back what they had in their youth. As the truth sinks in, Gerald’s ego is replaced by anger. Anger at his not being able to be a good husband, not being able to “satisfy” his wife or so he thought. In a rage unlike him self, Gerald gets on top of the hapless Jessie and exerts his power. But someone should have told him about the healthy dosage of viagra at his age. In front of Jessie’s very eyes, Gerald feels a stinging pain in his chest and falls down dead on top of her. Pinned underneath him Jessie keeps calling his name, hoping he would wake up but he doesn’t move. Unable to breathe and with her hands tied both literally and figuratively, she kicks and moves him off of her. The now limp body of her vigorous husband rolls over the bed and hits the floor. Jessie is unable to see nothing except his hand which is still visible at the left hand corner. As she frantically keeps calling his name, she notices a stream of blood pooling around the visible arm. After calling for help for several hours, she finally hears footsteps. She remembers that they had left the door open and maybe some passerby had heard her cries and walked in to help. But her hope is quashed as the mongrel walks into the room looking up at her longingly and hungrily eyeing Gerald’s fresh body on the floor.

Hereon, what had seemed like an innocent act of reinvigorating lost love, turns into a dark and twisted tale of Jessie’s descent into madness as her past and present are spliced into an extended nightmare. The guilty voices in her head manifest into several versions of Gerald who walks around the room talking to her, blaming her for all this. The tiny voice of Jessie who wants to defend her also manifests into a vision, asking her to ignore what the imaginary Gerald bode her to believe. Through the gripping interplay of the imaginary Gerald and Jessie, the childhood of Jessie is revealed to us. As we come to know more about her through these flashbacks, her personality and behavior starts to make sense. The story takes on an even darker aspect as we understand that this was not just a simple fuss that is common among couples, but that it went much deeper and farther back to when she had been a teenager. With every passing hour and day, Jessie’s entrapment in that morbid room prods her along into insanity as her nightmares and past-traumas seep into the real world. 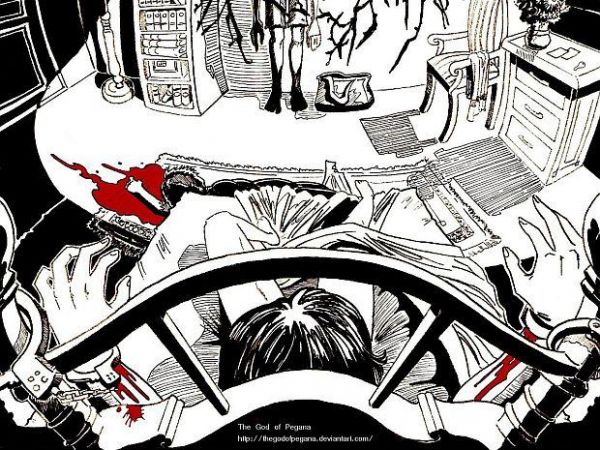 Carla Gugino as Jessie is phenomenal as she switches character from a beautiful, abiding wife to a woman walking on the edge of madness, talking to herself, conversing with the voices inside her head. Bruce Greenwood plays the devil’s advocate as both his real and imaginary selves try to bury Jessie with guilt, blaming her for his failure in life and in death. Complementing these talented actors is some of the most original adaptations that I have seen recently, portraying a complex idea through crisp editing and intelligent screenplay where every single detail plays into the story as a plot-driver. Mike Flanagan’s earlier foray into the horror genre through the cult favorite Occulus works flawlessly as a seemingly mundane premise is turned into a mind-bender reminiscent of another King classic 1408. Flanagan captures the essence of King’s portrayal of the human condition and runs with it. The uniqueness of the idea leaves you hard-pressed to classify it. It starts as a thriller, turns into a horror in the middle act and ends with a psychological drama by the end of the final act. Just so you are warned, no matter how predictable it may seem to you – nothing prepares you for the final scene. It is bound to haunt you for days if your psyche is already not scarred by the middle act.

Despite being a tightly knit story, the final act might seem a bit rushed if we are nitpicking. The introduction of the Moonlight Man seems abrupt and doesn’t tie in with the rest of the story feeling like a pseudo-prop. Unless there is some hidden symbolism, the purpose of this strange character doesn’t seem to be apparent and almost nothing is explained about his appearance and the subsequent events. Having said that, the fact that Jessie had not been imagining the whole time and that she had been left exposed to the Moonlight Man makes for a terrifying scenario, if you can imagine yourself that situation.

Gerald’s Game is streaming on Netflix right now. You have been warned!