“All boxers are liars. Con men. The better the liar, the better the fighter. That’s because if you knew what was in a fighter’s heart, if you knew what he was really thinking, he’d be easier to find. And if you could find him, he’d be easier to hit. And if you could hit him, you might expose him. And that might expose every person they never stood up to and every person they never stood up for. A single blow can unveil the watermark of your soul in a way nothing else ever can.”

This is an intriguing perspective on a sport which is often personified as brutish, unidimensional and simplistic, at least from the outset of an average joe. If that were the case, every other person could become a boxer, hitting at anything that moved until their flagellating limbs broke down. However, Boxers are not automatons who start pounding on cue and stop at the ring of the bell. They are people who have found a medium of expression. They might have a history of oppression, anger or even inspiration, it doesn’t matter, for they have to teach their fists to talk.

Anurag Kashyap’s Mukkabaaz is not a film about the sport of Boxing as it would seem from the outset. It is more about expressionism wherein the medium happens to be Boxing. The protagonist Shravan Singh, played by Vineet Kumar Singh, is convinced that the only way to escape the drudgery of life is to become a first-class Boxer and make it to the National team. This worldview of his is apparent in his opening sequence where he is having a casual conversation with a fellow-boxer about the appalling state of sportspersons in this country. Shravan is skeptical about his future and doesn’t know what else he would do if Boxing didn’t work out, to which his friend comically suggests that all the boxers he knows are now bouncers or bodyguards for local politicians. To them, Boxing is a stepping stone that might provide them with a Govt. job or a decent monthly salary. 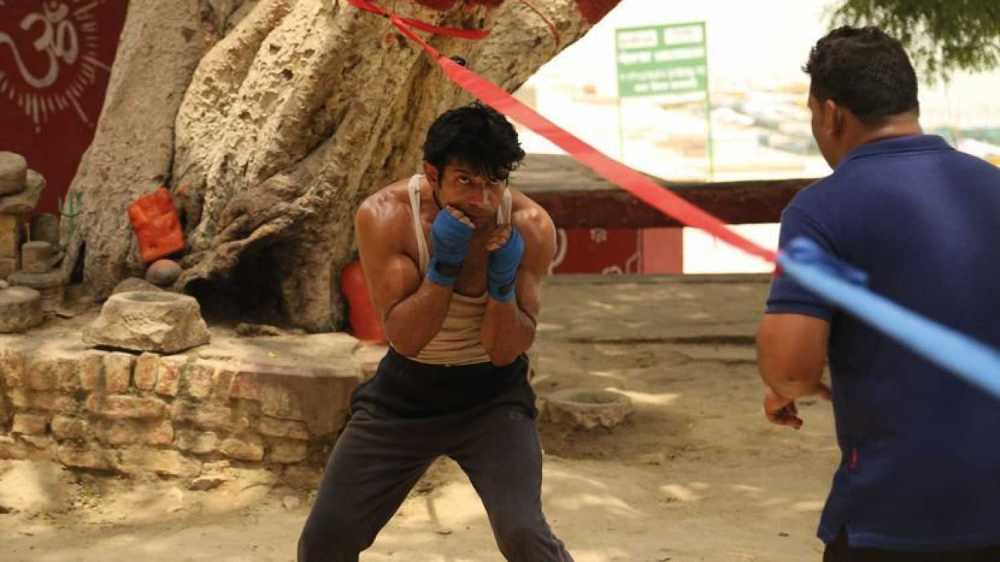 Shravan’s coach in Bareilly is a fierce ex-Boxer named Bhagwan Das Mishra, played by Jimmy Shergill. Mishra is an egotistical maniac who treats his apprentices like his house-servants. Shravan quietly obeys the master like everyone else but deep inside he is aware that his Boxing career is not going anywhere. During a disagreement with Mishra about an errand, Shravan pulls a full-fledged right hook on his face. Baffled by the unexpected outburst and his audacity, Mishra orders his “students” to beat him black and blue just to teach him a lesson in obedience. Shravan might have even forgiven and forgotten that episode, if only he hadn’t met Mishra’s niece Sunaina. From the moment he set his eyes on her, Shravan promised to himself that he would become able enough to keep her happy, and that meant that he would need to fight the red-tape and become a Boxer. Little does he know that, despite his best efforts, it is Mishra who holds the strings to the selection committee which nominates local Boxers to participate in national-level tournaments. This system of oppression changes Shravan from a simple-minded wannabe Boxer to an obsessive fighter who could go to any end to have his rights.

Expressionism as a character definition flows like an undercurrent across all of Kashyap’s characters. Shravan’s passion for Boxing is a result of years of rebuke that his father has thrown at him due to his lack of interest in academics. Boxing is also a way for him to rise up to his father and show him that he mattered too. Bhagwan Das Mishra’s mode of expression is dominance, arising from his unfettered control over the Board of Selectors for Sports in his region. We do not get a concrete backstory about him but judging by his eye ailment, he might have had to retire from Boxing prematurely which might have changed him into an ascerbic and cruel man. Mishra’s niece Sunaina is deaf and this introduces yet any form of expressionism in the story. After they get married, Shravan is inducted by the Railways after winning a State-level tournament and has to juggle between a full-day’s work and practice after that, leaving him barely any time to take care of his wife. In a scene, Sunaina tries to express her disappointment on his negligence using sign language. Shravan’s frustration over an unsupportive boss and a strict coach gets the better of him. He yells at her saying that he doesn’t understand her, essentially meaning that this is not his mode of expression. However, he does learn the sign for “Sorry” and apologise to her later, accepting a confluence of her form of expression with that of his own. However, the biggest transformation in Shravan is brought forth by his new coach Sanjay Kumar, as played by Ravi Kishan. Unlike Bhagwan Das Mishra, who is from an upper caste and treats everyone else like filth, Kumar is from a lower caste and has grown up being made aware of that fact every day. He appreciates underdogs like Shravan who have the gall to stand up to their oppressors and make their own way. Kumar also senses the pent up angst in Shravan and sees that reflecting in his sentimental punches. He sees that unlike seasoned players, Shravan makes his emotions easily apparent, thus exposing himself to his opponents in the ring. In a thought-provoking dialogue, he asks Shravan if he wanted to be a Mukkebaaz or a Mukkabaaz. According to him, there is a big difference in those words which are practically identical. While the former depicts an amateur who fights like a boxer in the dark, it’s the latter who is enlightened and channelizes all his insecurities, fears and anger into that one career-defining punch.

There are undeniable similarities between Fincher’s Fight Club and Kashyap’s Mukkabaaz. Even though Tyler Durden saw through the cracks of a decadent consumerist culture and tried to punch his way through it, the underlying philosophy was to challenge the status quo through a mode of expression which was to become the Fight Club. Mukkabaaz is also about challenging the status quo and Shravan Singh’s journey to becoming Tyler Durden.