Phantom Thread is probably the last time we are witnessing the stupendous artistry of arguably one of the greatest Hollywood actors of all times, Daniel Day-Lewis. Nostalgia struck me hard as I entered the theatre to watch an exposition of expressions so neat, that it is almost palpable and you feel the emotional roller coaster and mellow tenderness in the claustrophobic sets, like a fly on the wall. Daniel Day-Lewis has been an institution of acting for generations of movie lovers and a practitioner of the oft used cliché ‘method acting’, well before it became fashionable. In fact, through career defining roles in My Left Foot and Gangs of New York, he showed that method acting is not a weapon of the craft to be unveiled when the necessity arises, but it is the craft itself. His remarkable career with multiple Oscar wins and universal critical acclaim, yet a reclusive private life attests the fact that you can be a luminary of the masses, yet keep your living room to yourself.

Director Paul Thomas Anderson gives a canvas to the master to show his artistry. The entire movie is a battle of love and the oddity of expressing the same. The director marries passion of a creative genius with obsession of his muse and creates sequences after sequences of pure sparks. You do not need guns to have a shootout if you have two lovers whose amour fou borders on sadism. On one hand you have Day-Lewis playing celebrated fashion designer Reynolds Woodcock whose life is centered around designs, sewing, drawings, customer satisfaction and breakfast in tranquility. He finds his latest muse in a waiter Alma (Vicky Krieps) whose calm demeanor and lady like poise yet a subtle vulnerability in front of an artist like Woodcock makes our designer gravitate towards her. As she enters the carefully dissociated sanctum of Woodcock, things change for both. What started as a cutesy oddball love story of an artist and his muse quickly became a struggle for relevance in case of Alma and staying true to his craft for Woodcock.

Leslie Manville as Cyril, Woodcock’s sister is cold, yet, the one who holds the entire show together with her steely eyes and an equal devotion to her illustrious brother. The scenes with all three in frame are the gems which this movie uses abundantly. The tension, the scheming, the trust, all human emotions come out to the fore one after another. In one of the most nerve wrecking moments towards the end of the movie, Woodcock is suspiciously looking at Alma as she cooks him some mushrooms. The scene has few dialogues, but the staring contest and the fear of the extreme gets a few goosebumps rising. If you have seen stand-offs in cowboy movies, you should see Day-Lewis in one here. An actor’s half the job is done with his eyes. And Daniel Day-Lewis is a master in emoting even if he does not have many lines. The script is held tight by the dialogues and the calm repartee between the leads. You can either shout and betray hate and anger, or utter scathing words, yet be poised and smiling. Paul Thomas Anderson uses the later to keep the interactions lively yet somber.

Long after you have walked out of the cinema hall, two things will be etched in your memory- first, the lingering notes of the piano of Music Composer Jonny Greenwood and the close ups of the leads whose defined facial expressions form the thread which knits the entire script together. Phantom Thread is an exhibition of acting like no other. Most of the movie takes place in a 1960s backdrop in Woodcock’s house. Comedic elements are sprinkled judiciously to keep the audience invested in the characters, lest it ventures far from love. But it is a love story at heart. It is about one man’s idiosyncrasies versus a girl’s admiration yet obsession with her lover whom she finds unbreakable from the monotony. She goes to extreme lengths to break him and his ritualistic life. And that is all that Phantom Thread is. What makes it much more, are the acting, sequences of madness and humour, attention to details of representation of the era and a director who knows how to draw a character, however flawed he may be. 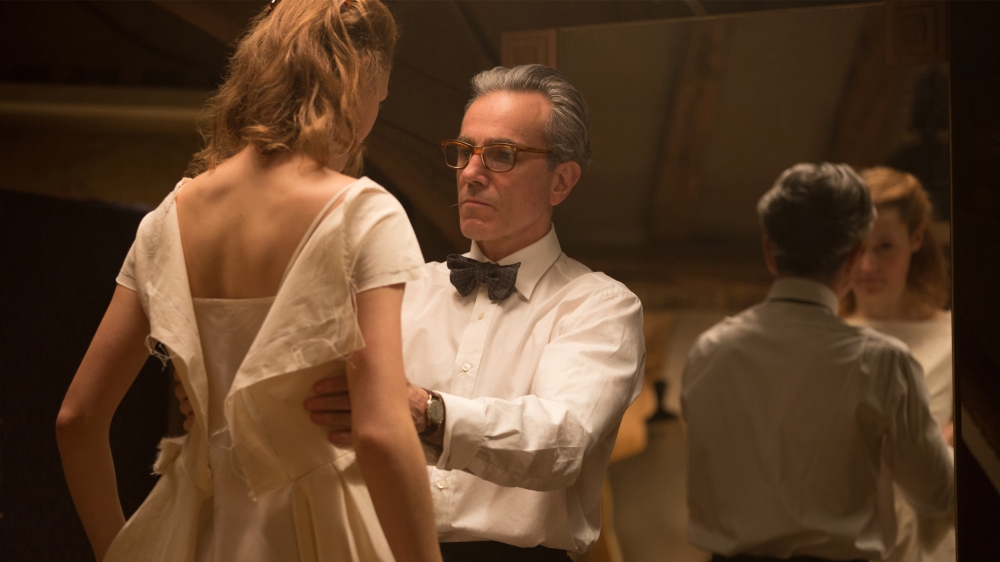 gobblpoint– Daniel Day-Lewis’ last movie. Please book a platinum seat, take your loved one along and enjoy this master at work one last time!