The Silver Screen is an enchanting medium. When you filter through all the glitz and glamour on the frame, you realize that there must have been a writer behind it all who visualized it way before the cinematography was even crafted and before the first reel of film was even captured. He had to rely absolutely and purely on his imagination to conjure up the very image of what the story would project on the screen. Writers are essentially the architects of cinema. You see their subtle fingerprints everywhere. Jerome Bixby was best known for his final work The Man from Earth which he started writing as far back as in the 1960s, finishing it only in the April of 1998 on his deathbed. He might not have realized it in the final moments of his life but he had given us one of the most profound and endearing works of fiction which questioned the very foundations of our civilization. Adapted in 2007 by Richard Schenkman on a shoestring budget of $200,000, The Man from Earth saw limited releases after debuting in the San Diego Comic Con in July that year. It wasn’t until discussions started out in private forums and blogs that word of mouth about the film spread like wildfire, instantly elevating it to cult status. 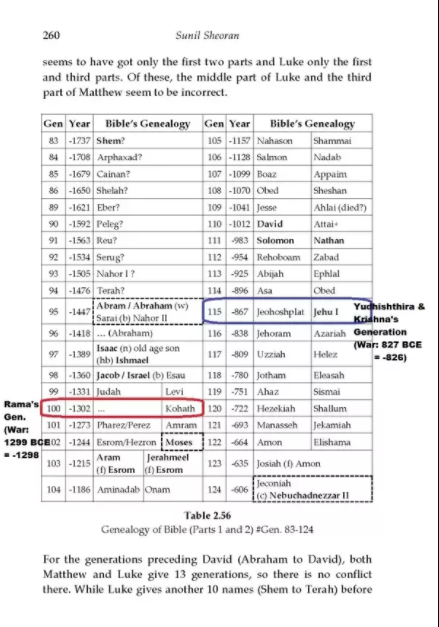 The revelation of the conspicuously named John Oldman as a Cro-Magnon living in the Digital Age re-ignited one of the classic age-old fantasies that mankind has. This is such a popular concept that it can even be observed in our mythological texts where beings like Hanuman are said to have lived across two epochs. Hanuman first appeared in Valmiki’s rendition of Ramayana which had supposedly occurred during the Treta Yuga. Interestingly, Hanuman also makes his appearance in Veda Vyasa’s Mahabharata which takes place during the Dwapar Yuga. Through celestial descriptions in the two epics and then comparing the same with the best astronomical data available, researchers have come to a rough estimate about when the two wars would have occurred. In the image below, you can see that there is a difference of about 500 years between the two wars. Now if Hanuman was present during both wars, it makes him our very own John Oldman i.e., a man or humanoid, as he was portrayed as, who had found a way to perfectly regenerate dead cells in his body. Bixby’s genius lies in how he manages to explain the biggest challenge that his story would face – How can a man live through thousands of years ? And believe it or not, it is theoretically possible, as was explained by Oldman’s biologist friend in the film.

Bixby also ties together one of the most polarizing philosophical concepts of our time about Religious Resonance. Throughout school we have been taught how various religions preach the same fundamental tenets of conduct and morality, and this is an undeniable fact. Many theologists even claim that all religions could have a common ancestor which would essentially explain how religions originating in vastly isolated parts of the world could tell similar stories in their scriptures. Bixby picks up this intriguing possibility and anthropomorphizes it in John Oldman, as the man behind all religion. Oldman’s monologue on how the ideas he had gathered along the way had been misinterpreted and mistranslated through osmosis is a testament to the semitic clashes that riddle our modern society.

The Man from Earth: Holocene takes place several years after the life-changing conversation in Oldman’s drawing room. David Lee Smith is back on screen after a decade and he has visibly aged. So has John Oldman, whose previous power of perfect cellular regeneration is now waning. Oldman is now a community college professor in another town and is known as John Young, yet another pun centered around his age. However, this time a group of young students stumble upon a book signed to Young as ‘John Oldman’. Intrigued by this misnomer, the students start digging into his past. The book in question written by Oldman’s friend Art Jenkins, the archaeologist, narrates his conversation with the man who had lived through thousands of years. First dismissing it as science-fiction, the students dig further into Young’s life finding no trace of his presence in academia. As his trail grows cold, one of the students theorizes that John Young was John Oldman himself, and that the book described their own professor.

Despite the gripping premise, the sequel falls prey to the curse of the ‘adaptation extension’. Without Bixby’s deep insight and keen understanding of our question of existence, Holocene feels more like an underdone narrative where Oldman conveniently fails to protect his identity, especially after the fact that he had had so much practice doing it. The screenplay of the film seems to centre around the college kids trying to unravel the truth about John Young. As a huge admirer of the last film, I missed the conversations that Oldman had with his compatriots, which in my opinion was its greatest appeal. Having said that, there were some interesting questions that were explored around the anatomy of Oldman himself, as to how he would survive an assault in the real world, which begs the question what all has he gone through in all his years.

I feel that The Man from Earth has immense potential as an idea but needs more screenplay than a couple of 90 minute films. I would love to see him existing in various time-periods across various seasons – Season 1 can be the Cro-Magnon era and so on. Every consecutive season can touch upon the biggest milestones in our history through which we can see Oldman’s character evolving and becoming more and more knowledgeable year after year. I would also be absolutely intrigued to watch him learn about his immortality and the repercussion he would face. If there is any network which is capable enough to take this project up, its you Netflix ! Hope you’re listening…