The End of the F***ing World is a surprisingly beautiful and binge worthy coming of age love story of two diametrically opposite clueless teaenagers. James who thinks he is a psychopath (he isn’t) tries hard to go with the flow without being noticed and Alyssa who thinks she is a moody free spirit (she isn’t) puts an effort to stick out like a sore thumb. In a rather quick turn of events the pair deicide to give the world two middle fingers and take on a road trip without a clue how and when it ends.

This high pitched fast paced road trip is riddled with misadventures of sort including punching a father, ransacking a petrol station, stealing a stranger’s car, stealing a family car, breaking and entering, lessons in consent, shoplifting, police investigation and a murder (all not necessarily in the same order).Our protagonists conveniently don’t have phones with them, which though hard to believe makes their misadventures easier to follow. The narrative in first person is great in providing insights in the minds of these teenagers who often give conflicting cues of their emotions. Both James and Alyssa have been etched with utmost precision making their complexities come across as genuine and not whiny, however this cannot be said for the other characters, there are a lot of well made side characters with too less screen time and missing context for their actions (Looks at Frodo) Humour in its grey undertone drips through every scene of this eccentric yet endearing drama. Indie director Jonathan Entwistle created an interesting paradigm where you know the scene is funny but aren’t sure how to quote it, like the flash cuts of (psychopath) James vividly imagining his new girlfriend/victim, bloodied and dead whilst being in serene grey sleepy English town.

My favourite thing however about the show was the length of its episodes, 23-26 minutes each. Making them incredibly easy to snack on along with the faced moving narrative with typical cliff-hangers forcing you to click ‘Next Episode’.The pace slows down in the second half of the show but that is a part where our pair does grown up stuff like ‘Self Discovery’ and ‘Realising Love’ so I won’t complain too much about it. The physical transformation of the pair is brilliantly used as a device to show their emotional transformation and self-discovery. Both the leads have done a great job, I will always think of Alex Lawther as a psychopath who isn’t and Jessica Barden as a moody free spirit who isn’t.

The end of show is pretty vague, without giving away much, on a scale of 0 to 10 the vagueness of the ending is 8.92. Which can be frustrating because as of now Season 2 isn’t confirmed and guessing game is not my forte.

Overall a pretty well made show, this 3 hour teenage Bonnie and Clyde is worth your time, especially if dark humour, misadventure and road trips are your thing. 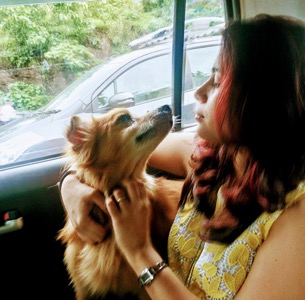 Manjiri is an avid reader and a textbook introvert who prefers the company of four legged furballs over her 4 friends. When she isn’t squealing about animals she prefers reading fantasy fiction and watching crime documentaries. Manjiri aspires to become a meme overlord someday and rule the internet !