Do you have a weekend to spare, good sir/madam? Because what Netflix released this April will consume you and a weekend before you even realize! Money Heist (La Casa De Papel in Spanish) has been the most watched Non-English series ever on Netflix and it’s ‘binge-ability’ is an amalgamation of some inimitable acting, whirlwind sequences and crisp storyline.

Binge watching has become an observed cultural phenomenon over the last few years. This has even manifested into ‘couple-bingeing’, ‘single-bingeing’ and ‘binge-cheating’. Don’t blame me, but during these times of Tinder et al., I was particularly intrigued by the last of those cultural phenomena. Netflix study shows that 46% of couples secretly move ahead in watching a series they are following together, at least once. 81% of those ‘cheaters’ are unabashedly repeating their ‘offence’ and 44% of them do it multiple times! Good Lord! But that also says how Netflix and other streaming services are satiating the innate desire for quality content of users who are fed up with TV and even movies. But I digress. The series in question, Money Heist, is a Spanish single season production initially aired on the Antena 3 channel. Netflix has an eye for quality work and they discovered this gem for the discerning, language agnostic viewers like us. To reference English language works of the past, Money Heist can be called a marriage of Prison Break, Baby Driver and Ocean’s Eleven while the break neck pace is highly adrenaline inducing.

A good series is one where you care for each of the main characters, however equivocal their moral compass is or antagonistic their actions are. In this case, every single character, right from the leads, Tokyo, Denver or the Professor and even the minor spokes in the story, like Arturo, have been given great range to connect with the audience and be part of the main narrative. So who are these Tokyo, Denver, Nairobi you ask?

Here is the main premise of this riveting story. A mysterious person called the Professor hires few petty criminals and social misfits to work on his audacious idea of taking the Royal Mint of Spain hostage for a few days. He is not a maniac with a devil-may-care attitude, on the contrary, he has been preparing for this heist all his life and he has calculated every permutation that can occur and is self- assured about every scenario they may encounter. The rest of the cast is as diverse as they come. Tokyo and Rio are the brash couple who are consumed by love, yet are scarred from within and dream of an idyllic life post the heist. Nairobi is hot headed while Berlin is her opposite and the shrewd orchestrator and in charge of the operation from within. Inspector Raquel Murillo (Itziar Ituño) is the steadfast inspector bent on taking these criminals down. Her story evolves as the show progresses and her roller coaster emotional journey is well crafted out by the Director. But most importantly, the show gives us one of the most sly but shy Ringmasters since the suave Danny Ocean assembled his group of robbers and stole our hearts. (apologies for the PJ)

What starts as a Heist show superficially, is in fact a love story, a story about camaraderie and sticking with your trusted ones. The relation between Denver and Monica could have been any rom com. It is a love story between a petty criminal and his victim who starts developing Stockholm Syndrome and eventually moves to the other side. The series has very little bloodshed, almost to a point of raising a question in the minds of the audience. In all honesty, it is by design. Do not wathc this series as a simple action drama, it is much more than that. It makes you root for the bad guys. And don’t we like it! 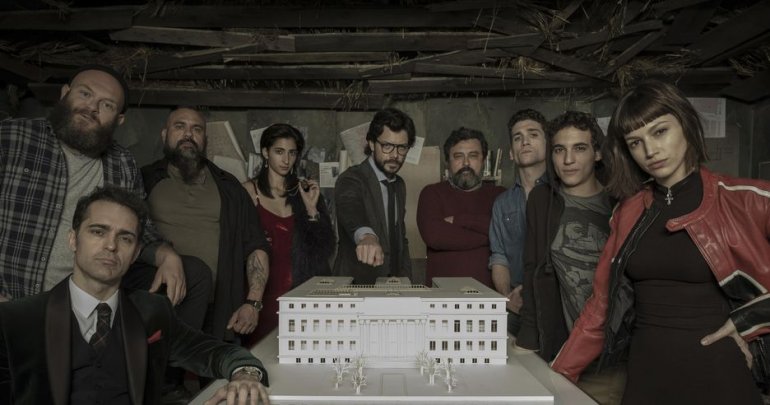 Netflix just announced that it is renewing the series for a third season. Knowing Netflix, we know the stakes will be higher and the story will get only crazier from here.

gobblpoint— Money Heist is as addictive as it comes. The plot twists are quicker than any roller coaster ride and the characters will occupy your senses till the finale and beyond.