Owens Lee Pomeroy described it perfectly when he said ‘Nostalgia is like a grammar lesson, you find the present tense, but the past..perfect!’ Ruminating over the idyllic summers of our childhood is entrenched in human nature. It gives us permanent moments of self-satisfaction and fond memories to carry us through any tough day. For fleeting moments, life seems pure and languid and not the usual mess that we seem to find ourselves in, once we start ‘adulting’. For 90s kids like me, the nostalgia is vivid. I can easily transport myself to the times when the coolest gadgets used to be the Camlin box, the best drink used to be Roohafza and social media was nothing but playgrounds close to home or at school. Millennials talk about binge watching as if it’s a new fad. We binged watched TV every Sunday morning and Shaktimaan was cooler and more relatable than the billionaire, playboy, philanthropist, Ironman.

Sameer Saxena and Saurabh Khanna have created a show which is a time machine of sorts as it immediately takes us to the 90s and puts us in the house of Harshu and his family. It is a family anyone can relate to and the attention to details make sure you notice everything which made our childhood special. It’s not much the props in the house but the essence of that era which Sameer, the director of the series, captures with great adroitness. Yeh Meri Family feels like a second trip on the merry-go-round which the director had rode along with all of us 90s kids and this series is just his ode to the days bygone.

Yeh Meri Family is the story of Harshu and his family during the summer of 1998. The family belongs to the quintessential middle class with the daily hustle being homework of the kids and the incomplete colouring of walls. Harshu is the middle child, and he is at the age when his mind wants to explore and fly free, but he feels he is being pulled down by his reining mother. Mona Singh plays the mother with the perfect assemblage of strictness with love sprinkled over in requisite proportions. She is mostly busy with the household chores, but keeps an eagle’s eye on all her three kids. She embodies the homemakers from any decade in India. The ones who run the show in the house and it almost feels austere, yet, without whom chaos will run riot in the family.

Vishesh Bansal as Harshu endears himself to the audience from the very first scene. His aspirations, mom issues, innocent crush on a classmate, all feel very relatable and brings a smile to the face. Every kid at that age has a confidante, and in this case, there’s the charming little Prasad Reddy, who plays Shanky. He is one character I would not mind having a spin-off of his own. Both Harshu and Shanky mostly talk on their huge landline phones and they are some of the more cutesy and laugh out loud moments of the show. The opening credits also strike a cord with the viewers as they show animals in their natural habitats living in families and playing and caring for each other. It is a sweet introduction to the show and one which hints at the delightful story waiting to unfold. 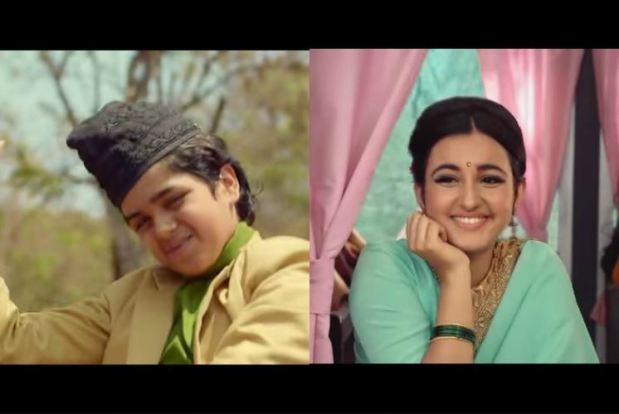 Sameer Saxena has quickly carved a niche for himself as a successful web series director. After Permanent Roommates and Tripling, Yeh Meri Family looks like another feather in his cap. The Viral Fever is the pioneer in web content in India and they set the benchmark quite high when it comes to original content production. Loyalists like me will vouch for their quality any day and with show like these, they satiate the demand for good desi content which unfortunately seems to be lacking on TV.

Watch the first episode here. (the 2nd episode is available on the TVF app and Wap-site.)