The hamlet of Kalardiya has recently been introduced to the word ‘Oscars’. As they try to understand what it means to be watched by a world audience, the realisation slowly dawns on them that they have found a place on the world map thanks to the plaudits showered on Village Rockstars, shot in the very lanes and houses of Kalardiya. Their most famous daughter has taken them on a globetrotting adventure they never imagined. However, Kalardiya has done more than just gift their extraordinarily talented daughter to the movie industry. As we watched Dhunu and her friends play and sing on the lanes of the village, we, the concrete girdled audience is constantly reminded of the unadulterated life and the earthy fragrance which is so typical of such places, ones which we have bid adieu in our pursuit of the fancy. And that is where the universal appeal of the movie comes from.

The movie was vying for the coveted nomination against some hugely popular and critically acclaimed movies like Padmaavat, Raazi, Gali Guliiyan, Bhayanakam, Ajji, to name a few. What tilted the opinion from the 12-member strong jury of the FFI in their favour was how global the story was, yet, so inherently Indian. Anant Mahadevan puts it perfectly when he says, “ The Oscar committee would always want a film rooted in that country and a technically well made and well-performed film. Village Rockstars is the closest that our cinemas have come to the international cinema”.

If we look at the last 8 years of India’s nomination for the Best Foreign Film category of the Oscars, the stories were strong and technically impeccable, however, their universality can be debated. While 2017’s Newton and 2014’s Liar’s Dice dealt with problems which resonate on a human level, the other movies like Abu, Son of Adam, Visaranai and Court may not have re-echoed with members who are primarily Americans, Britishers etc. While Visaranai was about police brutality (a subject Americans are sensitive about), Abu was about a person’s last wish of visiting the Hajj. Let us not even debate on the logic of sending Barfi! for the Oscars.

Based on the learnings from past years, the Indian selection committee zeroed in on the story of dreams one which is rooted to the Indian soil. Rima Das’s story is in fact nothing short of a dream come true for herself. A self-taught film maker, she took the reins of each department of her movie herself. Her’s is a story as fascinating as the young Dhunu in her film. From Chaygaon in Assam to the movie royalty of the Oscars, her’s is a story of persistence and patience. In India, there seems to exist two Bollywoods and one big ‘Despite’. On one hand we have a million dollar business with carefully made movies from a revenue standpoint and ‘despite’ the talent from across the country, they reek of nepotism and feature bankable stars, while on the other hand are stories like Rima’s who make movies ‘despite’ the hurdles and financial issues. 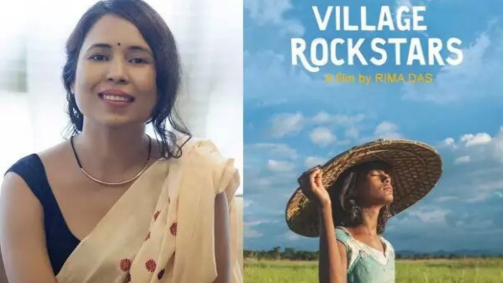 Rima Das’s movie about a 10 year old girl’s dream to own a guitar has struck a chord (easy pun) with audiences from Toronto, Cannes and back home too. The movie is an ode to the undying spirit of the people living in villages, touched by nature on a daily basis who also have dreams and yearns like anyone else who might consider themselves more privileged. Dhunu’s desire to own a guitar takes us on a journey which is a detailed anatomy of lives of those who have to make ends meet daily against all odds, yet believing that their dreams aren’t just a chimera. The movie moves along languidly yet effortlessly and allows the audience to slowly but surely join the young protagonists on screen. The deliberate minimal use of dialogues and stunning cinematography makes us, metro viewers, slowly encapsulated by the winds and purity of a village setting. The fact that Rima Das has spent her formative years there shows in her movie. No other movie maker could have reached into the soul of the place and present to us something so visceral.

Das uses close ups to show the innocence and the landscape beautifully! Her camera moves with the wind almost as these kids make their way through the rains and the roads. The movie is a simple coming of age story which reminded me of Apu and Durga from Pather Panchali. Bhanita Das as Dhunu shows amazing authenticity in her portrayal and makes us her pals. Yes, we, mostly adults watching the movie in comfortable recliners want to be with Dhunu and her buddies dancing in the rains. For those 87 minutes, we are transported to the magical land of Assam and the biggest worry for us was losing our goat and finding enough money to buy a guitar! Oh! Wish life was so untainted.