In the year 1925, just the year before Bal Keshav Thackeray was born, the first volume of the National Socialism manifesto was published. It was written by a young man who had traveled to Vienna from his hometown in Austria to become an artist. However, during his travails, his worldview began to shape into an abject hatred towards Judaism and towards the elimination of “racial impurity”. He would later become, perhaps, the most hated man in history and a synonym for the devil himself. We know him as Adolf Hitler. It is interesting how the ideologies of two men became inexorably linked to each other despite being born in two different ages and in two different continents. Thackeray was often compared to Hitler whose anti-semitic rhetoric, despite being highly controversial, attracted an army of followers large enough to invade England and fight a World War.

Both of them were stalwarts of oration, commanding reverence from their people. They even had a striking similarity in their humble origins as artists who had somehow failed to find a voice through art. Despite the reputation that Thackeray’s Shiv Sena holds today, the beginnings were a far cry from Hitler’s unidimensional plan of genocide. He wanted employment to be a fundamental right for the Marathi domicile before anyone else in the state.  However, his views would later become far more radical than what could be deemed secularist. In a statement given to Indian Today, he had quoted – “Muslims are spreading like a cancer and should be operated on like cancer…”. Thackeray’s ideology was a noble one that had lost its footing.

Written and directed by Abhijit Panse, Thackeray is a dramatized biographical film that follows the journey of Bal Keshav Thackeray from being a small-time cartoonist at Bombay’s ‘The Free Press Journal’ to becoming Balasaheb Thackeray, the founder of the Shiv Sena party. The narrative begins with the backdrop of the Babri Masjid incident wherein Thackeray was charged with inciting violence through his Shiv sainiks who had allegedly been a part of it. The screenplay switches back and forth between Thackeray’s early life and career through an active debate between him and the prosecutor. As expected, the towering figure of the man himself doesn’t leave any space for a secondary character in the script. Everything seems to revolve around him, be it his political life or his familial relationships.

As expected, the towering figure of the man himself doesn’t leave any space for a secondary character in the script. Everything seems to revolve around him, be it his political life or his familial relationships.

In one of his interviews with Anupama Chopra from Film Companion, Nawazuddin Siddiqui was asked if this was a political film in any way, to which he had answered that this was a factual film and was being shown as things had transpired. He was an actor and as an actor, it was his responsibility to play the man as authentically as possible. Although I don’t really agree with the first part of his statement, I was completely sold on the character. Despite the controversial nature of the subject, Siddiqui brings a spell-binding re-enactment of Thackeray on screen, right from the fearless walk to the commanding voice that pierced through the air like lightning. When you are playing a character who is a revered icon in the Marathi heartland, you are walking on the edge of a naked sword. Even though Shiv Sena was founded more than five decades ago, the ethos of that of a pro-Hindu and pro-Marathi party remains the same to this day. With that in mind, it can be stressful for any actor to take on the mantle where there is no margin of error. Siddiqui walks that mile effortlessly. 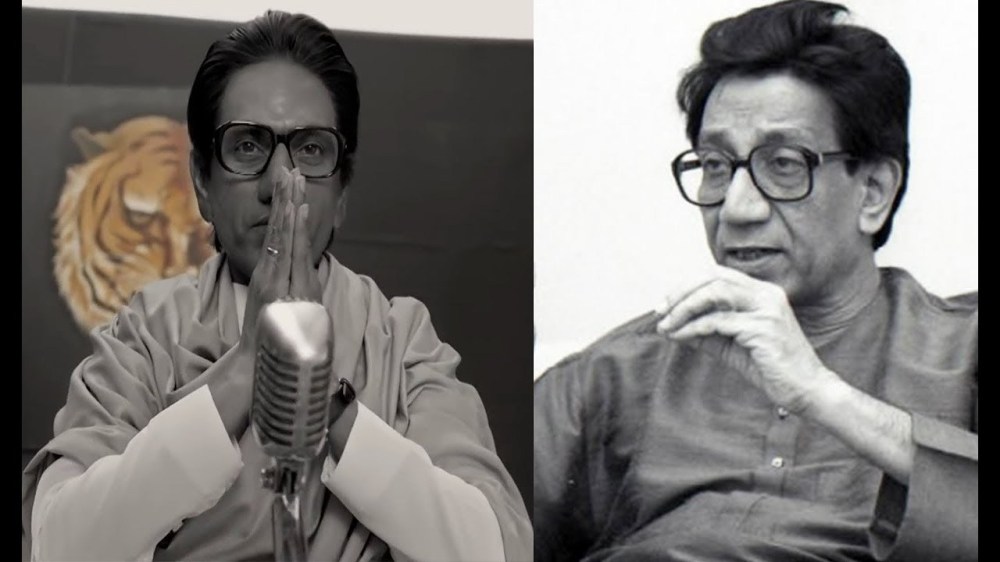 Panse’s portrayal of Thackeray is unabashedly an homage, complete with the sound of a tiger’s roar at opportune moments. This very aspect of the film makes it an exhausting watch in the second half when Thackeray has metamorphosed into the man we all know of him today. This is where you feel the lack of any secondary character arcs in the story. Amrita Rao’s character of Thackeray’s wife could have been an interesting exploration. The wife of a man who prescribes violence in his speeches could not have been okay with that. There were some moments where their relationship is touched upon but those scenes felt half-baked as if someone was intruding the “gallant narrative of the man”. The film steers clear of any grey areas that could show some lesser known personal struggles of his life. Having said that, kudos to the make-up team for making Siddiqui the spitting image through his get-up with the signature pipe and large-framed glasses.

As an audience, you would either love the film as its own story, or you would hate it thanks to the counter-intuitive ideology that it shows. In either case, it is Siddiqui’s performance that is the pall-bearer here. After his last performance as the venerable Manto, Siddiqui is becoming the go-to guy for biopics. It is ironical that Siddiqui who is a Muslim himself is playing a man who had been acerbic at times in his speeches against the Muslim community. I would have liked to be a fly on the wall where Balasaheb Thackeray watched the film, if he were alive, with Siddiqui sitting by his side.