“Great theatre is about challenging how we think and encouraging us to fantasize about a world we aspire to..” – Willem Defoe

This very challenge which Willem Defoe talks about has kept Mr Ananth Mahadevan driven for the last three decades and he is not slowing down any time soon. As I sat down in the visitor’s cabin, waiting for Mr Mahadevan to come in for our 7:30 PM interview, I started wondering who’s going to be on the other side of the table. The virtuoso theatre actor who has trailed a blaze for the art form, or the character actor who I have grown watching on celluloid. I got the best of both worlds. Joining him was the vivacious and highly talented Shweta Rohira who makes her theatre debut with That’s My Girl, featuring Mr Mahadevan and directed by another doyen of the theatre scene, Mr Bharat Dabholkar. Shweta, as I came to know later, is a multifaceted performer who sings, dances and also does some seriously good painting. How do I know, you ask? Well, when you watch That’s My Girl, you will notice sample of her painting in the set itself. Another reason for you to go ahead and book your tickets! 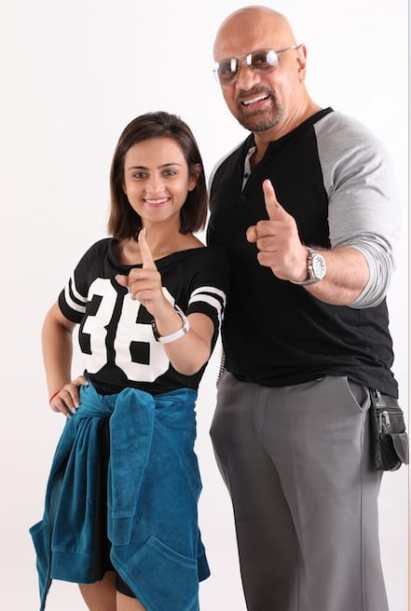 The interview tried to encompass individual journeys, their thoughts on the art form and the aspirations. Here are a few excerpts—

Screengobblr : Ananth, you started your journey more than 30 years ago. What are the major difference in theatre and Bollywood you noticed over the years?

Ananth : It has been a long and fulfilling journey and what has kept me going is the simple fact that theatre gives me everything and more which unfortunately other mediums may not be able to give. Theatre is one medium where you can experiment. For example, at the age of 25 I played the role of a 90 year old in a famous Arthur Miller adaptation called ‘The Price’. That was just the start and it became fascinating for me to do things which otherwise you weren’t allowed to do. Also there was the instant acknowledgement of the audience, one which every actor craves for.

What has not changed over the years is that not many original plays come up in India and we keep adapting foreign plays into Indian settings. However the evolution of the Indian audience has been one notable change. Initially, even Prithvi Theatre used to have a very sparce audience, but then the scene caught on and NCPA and the likes came about. Even a lot of smaller spaces sprung up. I remember Jaydev Hattangadi and Rohini Hattangadi doing their shows in such places nestled in the lazy lanes of Dadar. The problem with these places was that the audience reach was less and the ticket prices were marginal, which limited more people from joining the movement.

Screengobblr : Shweta, your journey is interesting as well. You started as a journalist and now you are doing theatre with stalwarts like Ananth Sir and Bharat Sir. How did the bug bite you?

Shweta : I always had the bug within me! However, my mother advised me to complete my education first and then embark on whatever journey I chose to pursue. I followed  the advice and here I am! I used to do catalogues for brands even during college, but education was always a priority during that time.

Ananth : The question you have asked is only 0.5% of what Shweta Rohira is. Do you know she’s a painter, dancer, singer, an influencer on Social Media (she has more than 400K followers) and now an actor! Do you know, she has also published a book and the painting you see during the second half of the play is by her too.

Screengobblr : Since we are talking about the beginning of your theatre journey with That’s My Girl, a supporting question can be that is this a stepping stone to bigger things…Bollywood may be?

Shweta : Theatre for me is my playground which gives me a chance to express myself fully. Whatever I end up doing in life, theatre will always be part of my journey and would like to juxtapose both seamlessly and manage to give time equally. I have dreams for sure. I watch any good movie, I get this feeling that I should do such content. But everything said and done, theatre will always have a special place.

Screengobblr : The question is for the both of you. With the advent of the Streaming services in India, people are spoilt for choices when it comes to entertainment. Where do you think theatre exists amongst all these?

Shweta : I have always enjoyed theatre. It was initially overwhelming to even think of performing live. But I was always an avid watcher. What helped me was that Prithvi Theatre was next to my house. I will go as far as saying that it is a myth that theatre is dying. Good theatre takes you to places which sometimes even movies cannot. Even my friends love theatre and they visit the popular spots regularly. So theatre is not going anywhere, it will coexist with all the other ‘distractions’ that people have access to these days. For me, theatre is also a sort of meditation where everything exists in the now. There is no retakes. Imagine the thrill you get!

Ananth : Theatre gives you a certain high like no other. Well, it can also give a certain low when income is concerned (everyone smiling). Yet people come back to theatre, why, because as a creative person, you get the most out of theatre. Even you don’t mind doing theatre for free if it is good.

Screengobblr : Ananth, you were part of the Jury which sent ‘Village Rockstars’ to the Oscars. Personally, it was an amazing movie with a lot of elements which bind the movie together. What impressed you most?

Ananth : I was very clear that If I was going to be on the Jury, I am not going to send a film which is going to shame India. I studied the last 10 years of the Oscars and what kind of movies make it to the nomination stage. I started with a process of eliminating films which do not quite tick every checklist. And then Village Rockstars came along and it was such a canvas of life in a village. Even silence was a character in the movie, rain was a important character and what Reema Das did with the movie was absolutely stellar work. I did not know if Village Rockstars would eventually be a world beater at the Oscars, but I was assured that this is the best work that came out of India and among the nominations for the year.

Screengobblr : Shweta, how was the experience working with a cast and crew like this one which you had for That’s My Girl?

Shweta : The entire cast and crew are so super cool. And all of these people are like my gurus. I will say that my first ‘Gurukul’ was super cool. Ananth Sir is cool but he is the strict one while Bharat Sir was the cooler one. (Shweta chuckles as Ananth looks on with a smile). Even as we were rehearsing, I used to notice Ananth Sir during some shots and I could feel I went wrong somewhere and I am going to get a verbal bashing after rehearsals!

Ananth : Exactly! My look changes when I see someone forgetting lines, missing a pause etc. unfortunately I am an honest actor and my face reveals everything. I will not say things immediately, but with my expressions I will convey it to Shweta that there was something amiss. It is a parallel play going on between me and Shweta, in between the sequences which we are enacting.

Screengobblr : Millennials are unfortunately so engrossed with the mobile devices these days that there are hardly any heart to heart chats with their parents. Whereas, in the paly we see a lot of conversations happening between he father and the daughter. How do you look at the dynamic?

Shweta : I can speak for myself and I think I communicate a lot with my parents. My friend circle may be a good representation of how we still go back to our parents with our issues, our achievements. The father- daughter connection is so sacrosanct which I don’t think any virtual distraction can take away. We show the same in the play where two people end up bonding through a series of confrontations, conversations and it becomes a beautiful story of what the dynamic of a father and daughter is.

Screengobblr : Finally, why should the audience come for That’s My Girl?

Ananth : The way Neil Simon conceived this play (That’s My Girl is an adaptation of the famous play “I ought to be in pictures” by Neil Simon), it’s interesting because it is driven by events which none of the lead characters foresaw. A daughter turns up at the door of a screenwriter, 16 years after the father left the family. The father has to rewind 16 years of his life whereas the daughter has to fast forward 16 years. The repartee, the confrontation and the sprinkled humour is what makes this absolutely compelling watch. The play is a beautiful symbiotic relation of two souls who try to meet at a middle point somewhere and start afresh. In fact, most of the audience which came to meet me after the show, said that they saw shades of their daughter in the character of Aishwarya or shades of their father in the portrayal of Anil Desai.

Shweta : The play is a beautifully knitted together sequence of fun and emotions. You will definitely take back something with you after watching it. After the performances, whoever has come up to me, has told me that they are taking few life lessons from it. You come expecting a humourous play with two madcap characters, but you end up taking back a whole lot, about love, about talking and confronting whenever needed and finally it’s a joyride like no other.

As we chatted for close to an hour with the two actors, I realised that this play is a work of passion. They are laying bare their emotions on the stage and laughing and crying and shouting at each other just to put across a simple point that love transcends the small issues in life and relationships are all that we have and we need.

Catch the show on the 24th of February at the famous Royal Opera house in Mumbai. I will be there cheering them on, hope you guys also join me for an experience like no other.

The play is produced by Mohan azaad workshop. The director of the company Mohan Azaad has been a film writer himself and has been nominated thrice for national award for his films to name one of them would be Chandni Bar. His association with theatre and Bharat Dabholkar goes a long way.

Here is the link to the Bookmyshow website for tickets : 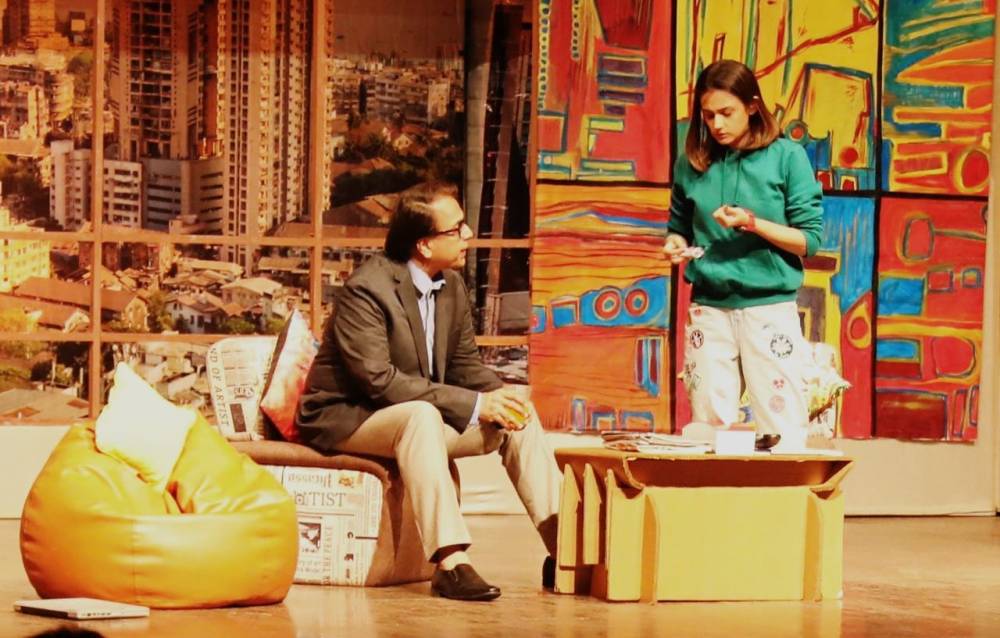