First things first, let us all take a moment to convey our gratitude to Melisandre, the Dragons and the moon for the only source of light during the 82 minutes long episode! This was an episode which had been hyped up for quite some time now. Not only a lot of characters were to be dispatched off, but the episode was billed to be the final launch for the Iron Throne for the leads. Disposed off it did, but only the fringe players of the Game.

The episode started with a palpable tension amidst the deafening silence of the armies waiting outside the gates in anticipation of the Army of the dead. These were the Dothrakis, the Unsullied, the bravest men in all seven kingdoms, but the prospect of a duel against creatures who were not even alive made them shiver inside. Let’s delve into the highlights of the episode –

The arrival of the cheerleader of the Lord of Light—

Melisandre had been almost side-lined for over a couple of seasons now. After the Jon Snow resurrection, the Red Woman wasn’t called up by anyone for anything of note, well, until now. Her visit brought hope, which was dimming , much like the lighting in the entire episode. Her spell lights up the arakhs of the Dothraki army and for some fleeting moments make us believe in the impossible. 30 seconds later, the grim reality stuck us. It is said that “ only a fool will meet the Dothraki in open field” . let’s add Army of the Dead to that list now! RIP

Melisandre’s character was one of the two which got a good closure in this episode. She helped light the trenches, reminded Arya of her destiny and finally walked off to her death.

The bravehearts from House Mormont—

House Mormont should be the proudest after this episode. Their most famous son and daughter sacrificed themselves fighting valiantly against the dead. While Lady Lyanna got a heroic exit, Jorah exited doing what he does best, protect the love of his life. In the latest behind the scenes episode, the makers David and Dan talk about giving Lady Mormont a fitting send off. She has been a surprise package all these seasons. Initially written as a one-scene character, the fierceness of the young actress Bella Ramsay forced the makers to give her a more important role and everything pays off to the final act of defiance where she downs a giant. 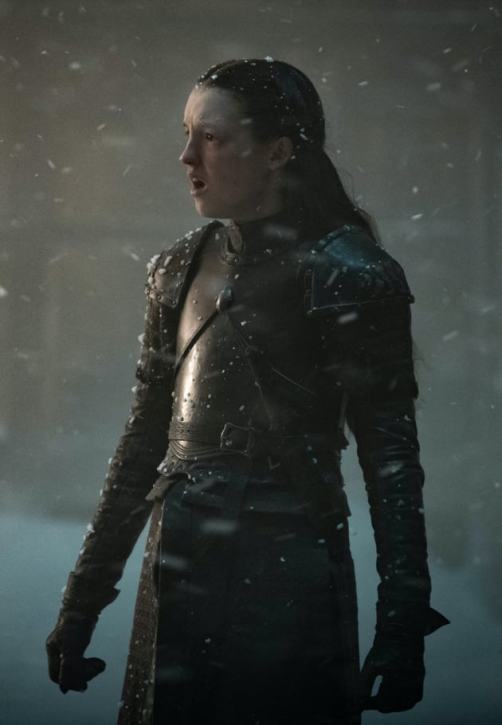 Almost every significant death in the episode is for the protection of a central character. Jorah did his duties saving his queen. As Daenerys and Drogon mourn, we are reminded of Jorah’s journey from the Dothraki/ Daenerys storyline to his greyscale solitude days to fighting off the wighs on a frozen lake and finally to his sacrifice.

Bran has been weirding out for seasons now. In the latest episode also, he went on a tour with the crows while Theon and his men bravely stood ground defending the Three-Eyed Raven. Theon’s character has been a case study for great writing. He started off as another character who had ulterior motives and with an eye on prizes, got his due sentencing from Ramsay as he endured torture for an entire season, helped Sansa escape the evil Bolton child and now redeems himself completely one last time. Bran knew Theon’s fate, so before he charged at the Night King himself, told him that he is a good man. Theon sleeps in peace now.

The Night King goes out softly—

Or does he? Danny’s ‘dracarys’ could not even burn his sleeves. Infact, the Night King was so not impressed by the dragon-riding queen that he let out a smirk almost. Really out of character for someone who defines death himself, but somehow it worked. It created the invincibility clout even more. And that is where, the gimmicky ending to the Night King’s fate makes me cringe! A character which has been an enigma for years now, his motives not jotted down clearly, his origins still debated across forums, and it takes one dagger to finish him. I know the foreshadowing started last season when Bran gave the Valyrian steel dagger to Arya, right at that place under the godswood tree. But come on, the writers could have avoided bending for shock value and given him a more satisfying death. However, the writing has to be commended for something else.

In Season 3 Episode 6, Melisandre meets a tiny Arya and issues a prophecy, “I see a darkness in you. And in that darkness, eyes staring back at me: brown eyes, blue eyes, green eyes. Eyes you’ll shut forever. We will meet again.” True to the prophecy, Arya shuts the Blue eyes of the Night King in this one with one giant leap. Taken down by Arya is not the scenario which many of us would have predicted. Jon , Danny or even Bran could have been the obvious choice. But if it was to be done as an impact and shock event, the makers did achieve that.

Bran’s random warging, his overall scheme, if any, needs to be detailed in the coming episodes.

Cersei is now the only main evil character left. Will it make the rest of the episodes more about scheming and clever repartee, or are we in for another battle soon? If some articles are to be trusted, another battle is coming our way soon. But does Danny and team have the numbers? Their depleted army may have an impact there.

Ghost seems to be fine! I am sure many of us were worried about his well-being.

The Night King being impervious to fire may prove that he is a Targaryen. Will be interesting to see if the writers touch upon his backstory any more.

CleganeBowl is now almost assured. Sandor and Gregor need to fight it out to finish the tussle which started in Season 1 (started even before that actually)

7 more days before we get a few answers. Can not wait!