Elton John stands in an attention position as smoke emanates all around him and within a second, he takes off for the firmament!! While you picturise that happening in your mind, let me palliate any doubts by saying that Rocketman is infact a well made biographical movie, albeit with few creative liberties taken here and there. Hollywood has taken liberties with great characters in the past, nothing more outlandish than making Lincoln a vampire hunter, yet, when it comes to great musical legends, they have tried to stay true to the actual story. This is primarily because Musicians already have a vibrant life and to put everything in a 2 hour movie is no small feat. Ray, Walk the Line, Straight Outta Compton, I’m Not There and the recent Bohemian Rhapsody have all been successful biographies about men who had character blemishes and/ or convoluted relationships, which were dramatized for the big screen. Unlike movies about political and historical figures, Music biopics are never reduced to a hagiography and the same applies to Rocketman. Rocketman is also a fantasy, a memory, slightly vague at that because of the substance abuse, of the journey of a man who never knew what love was till very late in his life. 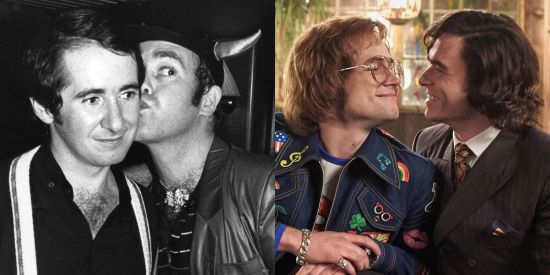 Elton John was born Reginald Dwight into a household with perennial domestic tension. His mother Sheila was cold to him and his father was mostly away on Air Force duty. Only his grandmother recognised the gift which young Reggie possessed and took him for piano classes and encouraged him to dream big. Early on, he was heavily influenced by Elvis Presley and he even joined a band, Bluesology where he had his first sexual encounter. However, his association with Bernie Taupin is what made him the great artist we now know of. Bernie and Elton have collaborated ever since they were introduced by Elton’s first manager Ray Williams. And they still proclaim that during all these years, they never had one argument although they parted ways briefly to ‘play the field’.

MOVIE TRIVIA : What is common between the movies Bohemian Rhapsody and Rocketman?

Director Dexter Fletcher. He completed Bohemian Rhapsody after Bryan Singer was fired for differences with the crew. Although Singer retained Director’s credits as per Director’s Guild guidelines, Fletcher was given an Executive Producer credit.

Rocketman is by no means a direct chronology of events in Elton’s life. Director Dexter Fletcher (who also directed Bohemian Rhapsody after Bryan Singer left the project) makes the movie a musical as an ode to the singer’s own music which is a reflection of his heart. Fletcher takes liberties in the portrayal of Elton’s long term manager John Reid, whose influence caused Elton to spiral towards debauchery. With no one who loved him for who he is, Elton’s life started resembling many other ill-fated singers who take easy recourse to compensate for loneliness. However, Rocketman is not a depressing account of a beloved man who has his shortcomings. The movie starts at a rehabilitation centre where Elton starts talking about his life and ends there as he resolves to take control of his own fate.

DID YOU KNOW? — John Reid was another common thread between the lives of Freddy Mercury and Elton John. John Reid was played by Aiden Gillen in Bohemian Rhapsody and Richard Madden in Rocketman.

Taron Egerton graduates into the big league with a performance of a lifetime. He is every bit the showman Elton is and emotes his heart out in the tender moments of the story, especially in the scenes with his mother and father. I will not be surprised if Taron ends up getting an Oscar nod for this. Imagine a world where both Queen and Elton John are celebrated on the grand stage within 12 months! Jamie Bell as Bernie brings out the unadulterated admiration and care of a lifelong friend and fan while Richard Madden plays a slightly dramatic version of John Reid who was also Elton’s first lover. Rocketman is every bit a celebration of a brilliant musician but it unveils the ugly story behind all the jazz and showmanship on show. A must watch!