It unsettles me to think that had Anurag Kashyap not tweeted about Super Deluxe, many of us would have averted our gaze and it would flown under our snob-nosed glares that has been conditioned to disavow regional cinema. Before you take offence, I do know that there is still a faction of cinephiles who are able to disengage themselves from the mental block that ails us and immerse themselves into the kaleidoscope that is “cinema from the south”. And I hate to use that phrase, when I am actually trying to denote how philosophically different the film-making styles are between the two industries. 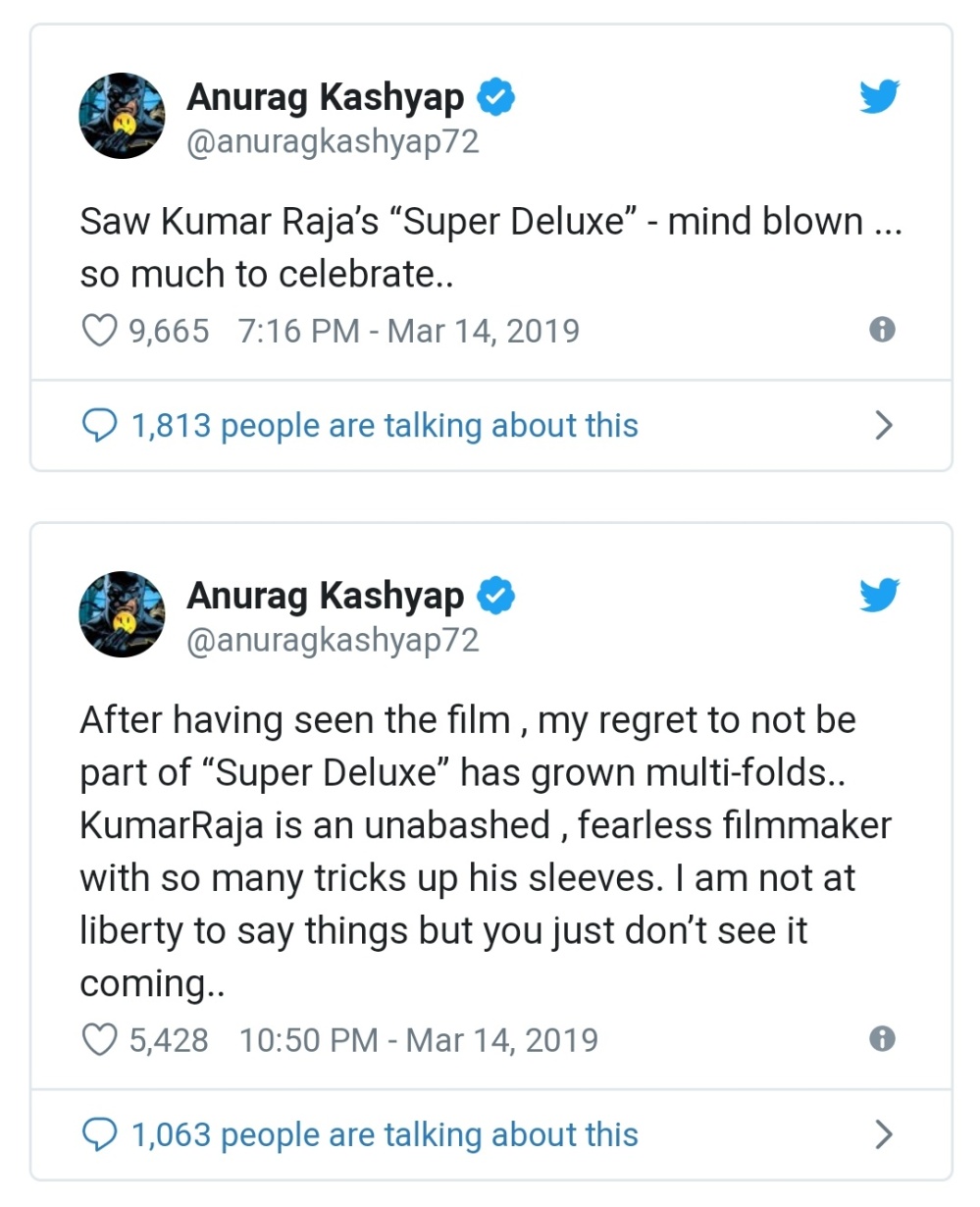 All said and done, Kashyap’s tweet worked wonders and Super Deluxe suddenly got the mainstream spotlight that it deserved from the get-go. After its limited theatrical release, Netflix acquired rights to the film and that opened it up to an audience that was clamoring to catch a view and was primed for it.

Directed by Thiagarajan Kumararaja, and written by Mysskin, Nalan Kumarasamy, Neelan K. Sekar and Kumararaja himself, the film follows three separate narrative arcs that get inexorably tied together through the intricate machinations of fate. Vaembu (played by Samantha), who is Mugil’s wife, finds herself in a quandary when her illicit lover dies on her during sex. Mugil (played by Fahadh Faasil) returns home and finds the body “safely tucked away” inside their refrigerator as guests from a nearby wedding call upon them. In another part of the city, a conservative household wait for the return of its prodigal son Manickam (played by Vijay Sethupathi), the husband of Jyothi and the father of Rasukutty, who had stayed away from home for seven long years. As they run to the doorstep at the sound of a car’s engines, they see a saree-clad transgender getting off with a smile on her face. In yet another parallel arc, five friends – Balaji, Vasanth, Thuvayan, Soori and Mohan have bunked school and gathered in Thuvayan’s house to watch a porn film. As the film begins, Soori is shocked to notice his mom in it. After bawling like a maniac and breaking the TV, he runs out with an intent to kill his mother as Mohan rushes after him to keep him from it. Meanwhile, the remaining three friends – Balaji, Vasanth and Thuvayan, find themselves embroiled with a local mafia-lord as they look for an odd-job to earn money that would replace Thuyavan’s father’s TV. Insane, right ? And we are just getting started.

Even with such rich material in his hands, Kumararaja doesn’t shy away from exploring the underlying motivations of his characters and the themes that encompass their individual stories.

Even with such rich material in his hands, Kumararaja doesn’t shy away from exploring the underlying motivations of his characters and the themes that encompass their individual stories. While Vaembu and Mugil struggle to get rid of the body, they also explore the elephant in the room that is their broken marriage which led Vaembu to have that illicit affair in the first place. For Manickam, as his sexual discovery threatens to throw his family into the darkest corners of societal taboo, the story also brings to light that he is good father, and that his sexuality has nothing to with his relationship to his child. The teenage boys, despite finding themselves in a chaotic mess, become subjects in the exploration of the dynamic between morality and spirituality, or their independence rather.

In order to portray complex ideas like these, the narrative needs to work in tandem with the visual aspect of story-telling. Cinematographers P. S. Vinod and Nirav Shah understand this and carve every single scene putting individual characters in unique settings that invariably become their very definitions. The use of saturated colours, especially the blue and green hues, lends a certain starkness as if the narrative promised to lay bare the uncomfortable truths that we are not ready to hear. Many of the scenes are wide shots that put characters in context to their surroundings. There is a certain depth to every scene as camera angles focus on them through objects or vantages that are kept out of focus. Vinod and Shah also put light to good use in their scenes, with a contrasting interplay between shadows and illumination that makes colours all the more vivid. In a particularly affecting scene, we see Soori’s father praying fervently in front of an obscure deity to save his son from the screwdriver which he had stabbed himself with while trying to kill his mother. As he stares at the mute statue in wild-eyed exasperation, the futility of it all begins to sink in. Another scene finds the three teenagers sneaking into the house of a “Northie” pickle-seller to rob him of his earnings. As they enter, the house becomes an other-worldly laissez faire where they don’t have control. The silence in the house is only dismissed by the polybags that are strewn on the floor in a set pattern like a surrealist painting. You have to see it to feel it. Such unassumming details would find new interpretations every time as you revisit them.

Super Deluxe is an outlier – outrageously inventive and invigoratingly cinematic. It gives you a lot of things to process as an audience, and especially if you do not know the language. Even though you fear that its essence would be lost in translation, it holds you captivated and its worth it. When the narratives come together into a pre-cosmic black hole, it bursts into a resplendent supernova becoming larger than what it had started with. It takes you to the vestiges of darkness, and pulls you back just when you had lost all hope for the characters. Whatever conditioning we had started with has been shattered to smithereens, and I don’t intend to pick up the pieces.